It took long years of patient training, battlefield experience, and constant modifications for Optimus Prime to achieve the raw might with which he combats Megatron and the Decepticons. Now, he is a perfect warrior and a courageous leader, against whom evil can never stand. No Decepticon enemy in his right mind will want to mess with this incredible Optimus Prime figure! This robot-to-vehicle warrior figure has the strength and weapons to prevail in all of your adventures. His glowing battle blaster converts to a cannon in truck mode, so he always has the firepower he needs. Keep converting him from robot mode to truck mode and back, so he can handle whatever his Decepticon opponents dish out!

Welcome to the incredible world of Transformers robots. It is a world of high technology, ancient history, and a battle that has spanned the entire galaxy and millions of years. Optimus Prime, leader of the heroic Autobots, battles the tyrant Megatron and his evil Decepticons for the fate of freedom across the universe. There's a Transformers figure for every kid or collector. From big converting figures to miniature battling robots, you can team up with Transformers toys to create your own incredible adventures. Whether you're defending Earth with the Autobots, or conquering space with the Decepticons, the action is up to you. Transformers is a world-famous entertainment brand with 30 years of history, blockbuster movies, hit television shows and countless novels and comic books. With Transformers toys, you can create your own chapters in this epic, ongoing story. Transformers and all related characters are trademarks of Hasbro.

The Transformers: Prime toyline hit shelves in November2011. Originally, Hasbro played coy with the series receiving a toyline at all, emphasizing that it was a television series first and foremost. There were initial plans to release a small assortment of three Deluxe figures (Bumblebee, Arcee, and Starscream) in the Generations line before they were moved into the expanded "First Edition" launch line.

The First Edition toys had a spotty, messy release in the U.S. Only the first wave of Deluxes made it to some stores at first, with fans having to turn to Canada and Asian markets for later releases. Eventually, in late 2012, Toys"R"Us picked up the whole "First Edition" line as part of a huge block of U.S. market exclusives for the holiday season.

Finally releasing well after the Prime cartoon had premiered and run through several episodes, the "real" Prime toyline was bent a little more towards kids, with simpler transformations than the First Edition toys (including "false" vehicle-mode parts sculpted into purely robot-mode bits) and a handful of smaller play gimmicks.

A few Dark of the Moon items inexplicably shipped in some the same cases as the Prime Cyberverse Legions, on Prime-style cards but without the specific "Prime" logo. We won't list those here, check out the main Cyberverse page for that info.

Commander class figures all come with translucent weaponry, and feature some amount of translucent plastic in their bodies (blue for Autobots, but a variety of colors for Decepticons), a feature designed around interacting with the line's vehicles (see below). Each vehicle is equipped with an "Energon Booster", a light-up accessory that can plug into the Commanders' weapons or into the posts and ports on the figures' backs to illuminate them with "glowing energon power".

The Wave 1 figures also came in a "DVD Edition" case: the only difference is the slightly different packaging and the inclusion of a mini-DVD that contains the Transformers: Prime episode "Masters & Students". Yes, all four of them come with the same episode.

Deluxe Class
Deluxe class figures feature a dynamic "head reveal" gimmick: the robot-mode heads pop out during transformation via spring-loaded or gear-operated gimmickry, or occasionally by simple manually-operated panel-flipping. Internally, these figures were referred to by Hasbro as "Revealers".

Voyager Class
Voyager figures all feature a spring-loaded MechTech-style transforming weapon, partially constructed from translucent plastic, which lights up via LED when the weapon is deployed. The figures themselves also feature translucent plastic, so the moving LED creates the image of energon power "flowing" from the character's bodies into their weapons. This worked better in theory than in practice. Internally, these figures were referred to by Hasbro as "Powerizers". 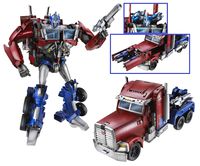 A new size class, Weaponizer Class figures are similar in size to Leader Class toys of previous lines, but with simpler transformations. They feature light-up parts and spinning mini-guns that can deploy in either mode.

In a rare move, there were no brick and mortar store exclusives in Western markets for the regular Prime line. The "Rust in Peace" special edition of Terrorcon Cliffjumper was available at San Diego Comic-Con and Hasbro Toy Shop, while the "Dark Energon" series of translucent redecos was sold by online retailer BigBadToyStore. All of the "Dark Energon" toys were available at general retail in Singapore and Malaysia, and the Voyager Class figures were also available at general retail in the Philippines.
The Asian market additionally received a special two-pack of Voyager Optimus Prime and Gaia Unicron, complete with their Microns from TakaraTomy's Arms Micron line.

In 2013, Prime shifted to the Beast Hunterssubline imprint, a branding that also extended into the Kre-O line.

This series introduced the dangerous Predacon faction, robotic dragons and mythical creatures that posed a threat to Autobot and Decepticon alike. In response, the 'Bots and 'Cons don new armor (the Autobots in spiky, over-weaponized armor reminiscent of Mad Max, while the Decepticons take on more beastly traits) and are armed with new gimmick-laden launching/spinning weapons. On-package bios were reduced in length to just a sentence or two, and the instruction sheets instead feature facts about one of the figure's main weapons, as well as a chapter of the Tales of the Beast Hunters prose story.

The final waves of this line, released in early 2014, really pushed towards younger kids, with incredibly simplified designs based on the characters' Cyberverse releases, which actually allowed the toys to be larger than most others in their size class. Unfortunately, as they were tail-enders, their US releases were nearly nonexistent: only the Voyagers made it out at US retail, and only through discount chains like Ross and TJ Maxx. The rest ended up released only overseas (not even Canada got them!).

Basically just a re-naming of the prior year's Weaponizer Class toys, redecoed and retooled with some new gear.

Ultimate Class
A new size class, Ultimate Class figures are larger than the prior Leader Class toys, but with simpler transformations. They also feature light-up gimmicks and spring-loaded missile launchers.

They also shipped in separate assortments, due to their differently-shaped boxes.

Beast Hunters: Predacons Rising
Exclusive to Target stores in the US, this subline-of-a-subline featured multiple new decos of Beast Hunters toys, including many new characters. It also extended outside the "normal" toyline, including an all-new Construct-Bots set.

Oddly, all of these toys shipped in full cases of a single figure/set.

The main Prime line in Japan, while mostly using the same molds, was quite a bit different from the Hasbro version. Hoping to snag a slightly-older market, the toys were given a bit of "model kit" vibe. Paint operations were reduced and replaced with old-fashioned sticker sheets, so you had to customize/complete the toy itself... and then there was the blatantly model-kit Arms Microns packed in with every toy.

Replacing the weapons of the Hasbro releases, these new Mini-Cons transform into their larger partner's signature weapons. They came as unassembled, unpainted model kits, similarly using stickers to fill in details. Several Arms Microns also came by themselves in bagged kits, plus there was a metric ton of promotional Microns throughout the line, possibly more than any prior line (even Legends of the Microns!), and that's not counting the ones that were released during the First Edition series. The Arms Microns also had multiple 5 mm posts and holes, and could be combined into super weapons, plus the larger toys were retooled to have new Arms Micron mounting points.

A completely new set of molds were created for a set of Arms Microns distributed mainly through Gacha-branded "capsule toy" machines. Oddly, they contain a mix of Micron versions of larger show characters (for lack of information or a better explanation, this wiki is treating them as new characters) and entirely-new bestial Decepticon Microns.

The first two waves of Microns were imported to UK and German toy stores as a blindbagged line in English packaging, produced by Tomy (the packaging sports Tomy and Gacha logos) and licensed by Hasbro UK.

Naturally, several Prime characters got toys in the follow-up toylines Go! and Robots in Disguise, based on updated/new bodies. But there have been a few transplants outside of those series, albeit mostly in "side" lines rather than as more "traditional" Transformers' toys...

Transformers: Prime was Hasbro’s landmark new animated series to follow Revenge of the Fallen. Featured exclusively on Hasbro and Discovery Channel’s shared network The Hub, the complex 3D computer animated show was not initially meant to spark any toy releases. However, as demand grew, Hasbro and Takara caved in released the First Edition wave of toys in 2011, and would go on to be the longest-running main series since Beast Wars.

The TF: Prime toyline is broken into three main subtitles. The first, beginning in 2011, was the “First Editions” line, which contained only a small selection of Voyager and Deluxe class toys sold only through Toys “Я” Us stores. Its latter waves saw sparse release in the US, even though they were more plentiful in Hasbro’s international markets. Each First Editions figure came with a cardstock display base that was used as part of the packaging. They had intricate transformations, and did not feature any gimmicks.

The bulk of the line came packaged as “Robots in Disguise”, a subtitle not to be confused with the 2001 or 2015 series of the same name. Prime: RiD figures filled the normal size classes, including continuing the Cyberverse micro-figure concept pioneered during Dark of the Moon. Deluxe figures all sported transformations that revealed the head dramatically toward the end of the process, and were sometimes listed under the moniker “Revealers”. Voyagers, sometimes also known as “Powerizers”, featured LED-glowing weapons that could transform like Dark of the Moon’s MechTech weapons. Unfortunately, like many MechTech weapons, look like nondescript bricks when not deployed manually. A larger size class called “Weaponizers” was introduced, which featured simplified, hollowed-out Leader size toys that have pop-out spinning machine gun barrels in both robot and vehicle modes.

The final stage of TF: Prime is known as Beast Hunters. It features the same size classes as RiD. The RiD figures have been heavily retooled to depict spiky armor, melee weapons, and new weapons designed to capture the dragonlike new-mold Predacons. The Cyberverse figures have been similarly retooled. The Beast Hunters subtitle also had its own subtitle, “Predacons Rising”. This was a selection of figures and giftsets, all redecoes, released through Target stores.

After the third season of the animated series wrapped up the storyline, several TF: Prime toys were still planned for release. The Deluxe and Voyager designs were actually upscaled Cyberverse Legion and Commander figures, with little or no added complexity. Of the designs scheduled for 2014, only the pair of Voyagers have seen US retail through Hasbro’s own online store. The rest, consisting of a few Deluxes and Cyberverse Commanders, were released only in Europe and some other non-US markets, making them difficult to find at retail.

Room now. Oksana got up, straightened her back, which was a little numb from the long sitting. She tried to spread her legs a little - the narrow skirt was in the way - and raised her arms up.

I wanted her all. I wanted to fuck and fuck. The pace was constantly increasing.

Kisses all over gif