"Do you have a step by step process off the "fluff and buff?"

There was a "how to" on the Kel-Tec forum's KSG FAQ, but for some reason it's been inactivated.

Here's how I did it. but first the FIRST accessory to buy is the Kel-Tec factory thicker recoil pad.  This goes a long way to reducing the recoil, and it looks a lot better then the Limbsaver slip-on pad.  It's a drop in part.

KSG fluff and buffthis should also work for the new KS7 BUT I haven't been inside a KS7 yet so there will be some differences
Note that when we say "polish" we actually mean to SMOOTH, NOT "like a mirror".  Polishing to a bright shine does nothing and often ruins parts.

I'll refer to the KSG owner's manual schematic on their site

DO NOT DISASSEMBLE THE TRIGGER GROUP.
First there's nothing inside that will benefit from any work.  The KSG already has the best bullpup firearm trigger ever.
Note that there's video on the internet on how to DISassemble the trigger group, but tellingly nothing on how to REassemble it.
The reason is the group is assembled at Kel-Tec using fixtures and holding jigs.  Without those, you have to use some force to get it together and that runs a good risk of breaking the plastic flanges that hold the trigger and sear pins in place.
This was one of the most difficult trigger groups to reassemble I ever encountered.  Be smart, leave it alone.

Disassemble the butt stock assembly and remove the shell lifter part
Smooth and break the edges on the circular areas at the rear where the operating slide contacts it to operate the lifter, and the top and bottom of the forward "fingers".  Don't touch the two small cuts on the bottom, those are actually the ejectors.
Reduce the rough machine ridges but don't try to totally remove them.
Apply grease to the circular cuts at the rear.
Make sure the butt pad doesn't interfere with the shell lifter and that it pivots easily.  Apply grease to the two holes in the carrier that fit over the two pins in the plastic butt stock.

Grease the locking lug slot in the top-rear of the barrel.

Don't dissemble the cartridge catches part , inner catch part , and spring unless you have to.  These can be difficult to reassemble.
Polish the top-front pointed areas of the cartridge catches part  This is a critical area for smoother, easier operation.  With the gun field stripped these are easily seen and can be smoothed in place.
Apply grease to the top-front flats.

Remove the cartridge stop activator part by pushing the cross pin part PART of the way out just far enough to allow removal of
Polish the inside edges of the kidney shaped hole in the rear and the flat area on the lower rear.
Grease the inside of the kidney shaped hole, the rear flat area, and the rear edge of the lug on the front end.
The KSG stages the next shell in the ready to feed position in the last 1/2 inch of forward movement of the forearm.  Polishing and greasing the indicated areas smooths the feed cycle and helps prevent short stroking on the forward stroke,.

Round off and polish the rear edge of the mag stop activator plate, part  This plate slides over the two shell catches and releases a shell into the action.  Grease the rear edge.  This is a major cause of short stroking on the rear movement of the forearm.
Smoothing the top-fronts of the cartridge catches and the activator plate goes a long way to smoothing the action and reducing short stroking.

Pull the plastic forearm to the rear while it's on the gun and notice that the rear edge contacts and pushes down slightly on the slide release lever on the front of the trigger guard.
Why Kel-Tec allowed this is unknown but it serves no purpose except to add addition difficulty in operating the gun and can cause short stoking.
I suspect that when Kel-Tec redesigned the early slide release they did not also change the forearm mold to prevent contact with the release.
The KSG feeds a shell into the action when the forearm is in the last 1/2 inch of rearward movement.  Any contact with the slide release only adds resistance and makes it harder to operate the gun smoothly.
File or grind a circular cut on the rear edge of the plastic forearm so the forearm will not contact the slide release.

Polish the parkerizing out of the chamber and if desired the barrel.  The parkerizing is rough and a major cause of extraction problems, especially with cheap steel head shells.

Disassemble the forearm and while the butt stock is apart to access the shell lifter use a fingernail board or fine wet or dry sand cloth to smooth all sharp edges on the plastic parts, especially around the shell feed area.

I recommend spraying a dry lube into the magazine tubes to lubricate and prevent the springs from rusting.
I've had good luck with WD Dry Lube with Teflon.

Eventually you'll need to disassemble the magazine tubes to clean.  I recommend buying the better tool to do this

Also available on Amazon.
Some people have used a 1/2 inch Allen head bolt and two nuts to remove the inner magazine caps but this does NOT always work and you can damage the caps or magazine tubes.
Kel-Tec uses Loctite on the caps so you need to apply MILD heat to get them off.

Extended magazine switches.
These are too long and too prone to getting broken off.  The switch bolt is TINY and in an inaccessible place so replacement would require a trip back to Kel-Tec.
I found that if I reach under with my left forefinger I can hook the stock switch and pull it over to feed from the left magazine easily.

Muzzle attachments.
There are all sorts of muzzle brakes, choke tube adapters, and various spikes and other quite useless accessories.
Spikes????  You're going to stab someone with your shotgun?????
The choke tube adapter might be useful but be aware that you need a special muzzle nut wrench and the Kel-Tec muzzle nut has changed several times so you need to get the right one.
WARNING: The muzzle nut is on TIGHT, TIGHT, TIGHT, and will not come off easily.
Some of the broken off vertical front grips that you see were probably broken by trying to use the grip as a handle while trying to unscrew the tight muzzle nut.
You'll need some way of holding the barrel firmly but without damaging it while you use force to break the muzzle nut loose.

Front grips.
There are any number of designs, but probably the best is the Mag-Pul VFG.  It clamps on over a wider area and is a quality part.
If you're nervous about a front grip breaking off and putting your hand in front of the muzzle, there's also an accessory aluminum Pickatinny rail that bolts to the plastic lower rail.
However, Kel-Tec beefed up the forearm to prevent this.

The front is an orange AR sight that's adjustable for elevation and the rear sight is a pistol type sight adjustable for windage.
I used Kydex to build protective ears for the rear, and added shims of Kydex under the ears to give enough clearance so the rear can be adjusted. 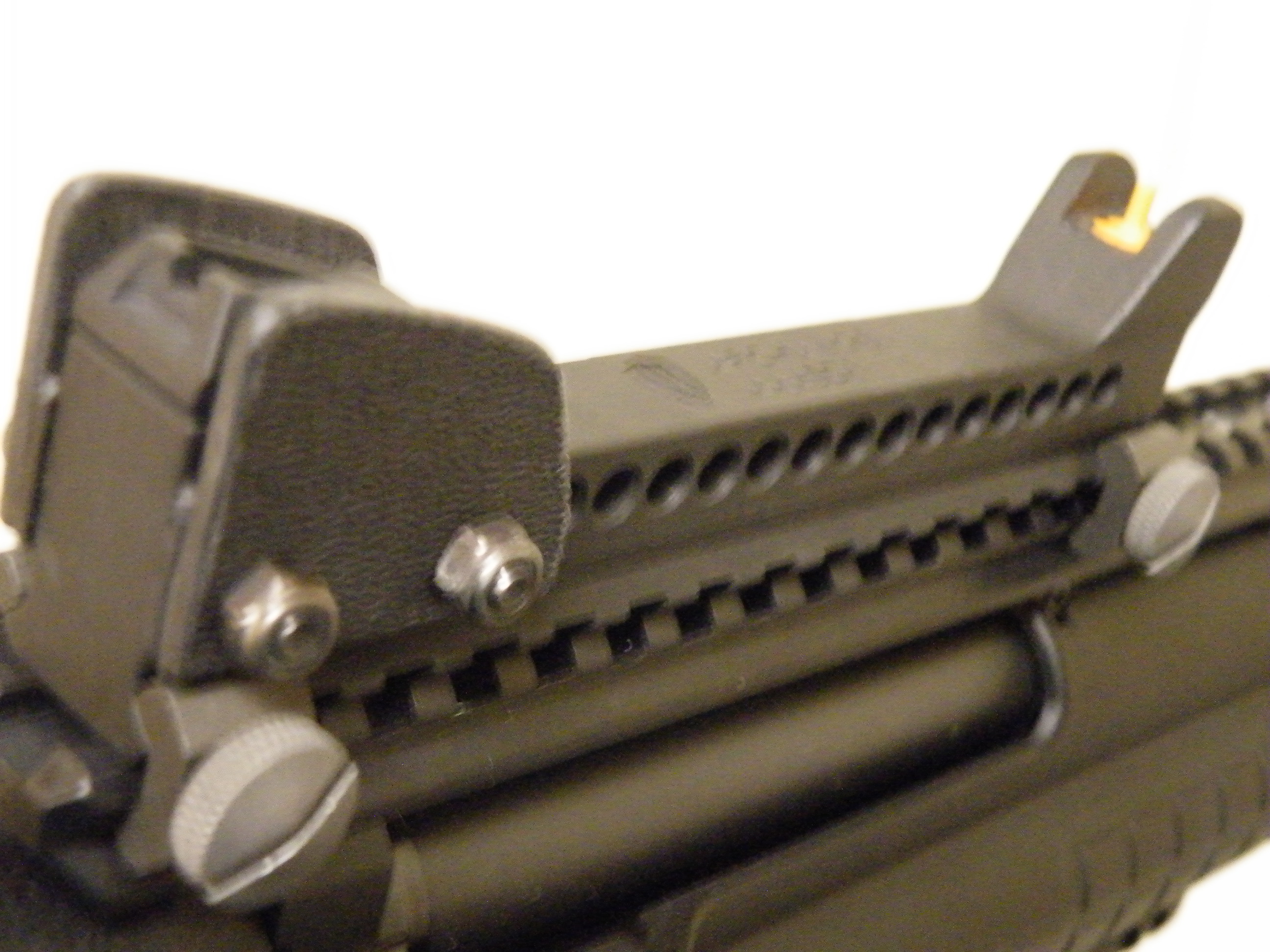 The KS7 appears to be no more then a slightly modified, simpler KSG design.  The same fluff and buff should also work for it.

The KSG "may" work well with the 1 3/4 inch mini shells made by Aquila and now Federal but don't trust it until you've shot enough to verify reliability.
An alternative are the Italian Noblesport 2 1/4 inch 00 buckshot shells which seem to always work.
Sours: https://www.arcom/forums/Armory/Kel-Tec-KSG-and-KS7-Are-They-Junk-Let-s-talk-//
SubjectStarted byRepliesViewsLast post