Harley Quinn has become one of DC Comics biggest properties in the last few years, rivaling even Wonder Woman in popularity and growing every year.

Despite being introduced as the Joker’s hot side-kick and little else in Batman: The Animated Series, the character quickly grew a personality of her own.

She’s bonkers – but also funny, confident, and a treat on the eyes.

Sure she’s evil, but she’s earnestly pursuing fun and love in her own way – and this makes her the perfect villain for The Sims’ whimsical world.

Let me share some of the best Harley Quinn custom creations out there, all tailor made for The Sims 4.

I know she’s a crazy super-villain who’s responsible for countless deaths in multiple timelines – but in all but the darkest and grittiest universes, Harley Quinn is adorable.

Creator Sugaredterror clearly thinks so, too.

So they went and got the cutest “chibi” Harley they could find and made an entire wallpaper CC set around it.

You probably wouldn’t want Harley Quinn to be your baby’s role model in real life.

But in The Sims 4, you’re free to plaster the walls on their room with cute felons if that’s what you’re into.

Harley doesn’t need to dress up to get into nightclubs.

Every bouncer in town knows that, and if they forget, there’s still the sledgehammer approach.

Still, that doesn’t mean she doesn’t like dressing up a little from time to time – as seen in Suicide Squad’s infamous nightclub scene where Joker and Harley toy with a lower-ranking criminal before killing him as some weird romantic roleplay between psycho villains.

This creation by AmiSwift does the dress from that scene justice, and comes in five new colors in addition to the movie’s black-and-gold checkers for extra versatility.

The world of Injustice: Gods Among Us is bleak and even more full of violence than the regular DC continuity.

Harley’s look in Injustice 2 reflects this.

She’s more muscular, and most of her outfits – including the one featured in this mod – look like they actually offer some protection.

If you’re a fan of Harley’s most violent and bad-ass version yet, be sure to check out this CC set by PlazaSims.

There’s nothing quite like Harley’s classic outfit, as shown in Batman: The Animated Series.

As someone born way before Harley’s new wave of popularity began, this is what I picture when someone mentions Joker’s paramour – a silly-looking jester with killer hips and a smile so crazy, you can’t help but want to know what she’ll do next.

Creator ColoresUrbanos brings this iconic checkered onesie to The Sims 4 for any female character to try on.

Give it to a Sim with the Erratic trait to tell the rest of the Sim who they’re dealing with.

Unlike some other entries on the list, this outfit isn’t a direct copy from Arkham City.

Instead it’s an interpretation explicitly created for The Sims 4.

Still, what makes this set so good is how well it blends into the world of The Sims 4. It allows Harley to be as silly as any other Sim without contrasting with a more “serious” outfit.

This pack features a total of seven creations, including face paint, gloves, shoes, tattoos, and the outfit itself divided into top and pants.

Get it for any female Sim adult, young adult, or teenager who can’t get enough of DC Comics’ fastest-growing female star.

No matter which Harley Quinn outfit you choose, you’re going to need a new hairstyle.

And none is as well-known as her Suicide Squad ponytails.

This hairstyle pack by LeahLilith only contains one model and length but offers a total of 17 different color swatches that should cover all your bases.

These include the SS cotton candy colors, a black + red combo reminiscent of her classic color palette, and a ton of standard hair colors that make this hairstyle versatile outside of cosplaying Harley.

Dr. Harleen Quinzel’s transformation into Harley Quinn isn’t complete without a drastic change in her makeup, whether that means painting her face black and white like a clown or going for the smeared lipstick route.

Creator FashionRoyaltySims brings us this high-quality makeup pack with enough detail and texture to take your close-up screenshots to the next level.

It includes smeared lipstick and eyeliner that screams “mental breakdown” or “nasty break-up.”

However you interpret it, this makeup will add a lot of drama to the life of whatever Sim you put it on.

I’ve heard some people complain that Harley Quinn’s outfit in Suicide Squad is too sexy. But I think this bright and colorful look does a great job of communicating what this villain is all about.

The outfit is designed to remind you you’re dealing with a total bombshell – but one with more than a single screw loose. You’re supposed to feel enticed but too scared to move a muscle.

Stare one second too long, and either she or the Joker will charge you for the show.

Luckily for your Sims, there’s hardly any real violence in The Sims 4 – so don’t miss out on this high-quality set from creator AmiSwift.

If you’re not such a big fan of the “Property of Joker” jacket, consider this alternative jacket-less take on the SS look.

This sporty, casual look by Lavoieri is perfect for an Erratic Sim’s day-to-day life.

As with Harley, you never know what’s going to happen next – so you need a one-size-fits-all approach to dressing up.

During the day, your Sim will look like a walking red flag, letting them carry on with their business unbothered by society.

But at night, this outfit would be the center of attention at the local nightclub.

Get this for any Sim that just screams “Daddy’s Little Monster.”

1. Harley’s Batman: The Enemy Within Outfit

Telltale Games did a fantastic job bringing Harley Quinn to life in Batman: The Enemy Within, where instead of the Joker’s converted follower, she plays a vital role in creating the villain.

Her look in this game is one of my favorites, as it cuts down on the campy factor of the classic design without completely abandoning it.

It really goes well with her personality, which is more dominant and independent than in previous installments.

This CC set by PlazaSims captures the appeal perfectly, while also making some slight changes to hit the Maxis Match art style that so many of us look for.

Nelson Chitty is a Venezuelan expat living in Argentina. He’s a writer and translator passionate about history and foreign cultures. His ideal weekend is spent between leisurely playing games of Civilization VI and looking for the next seinen anime to marathon. 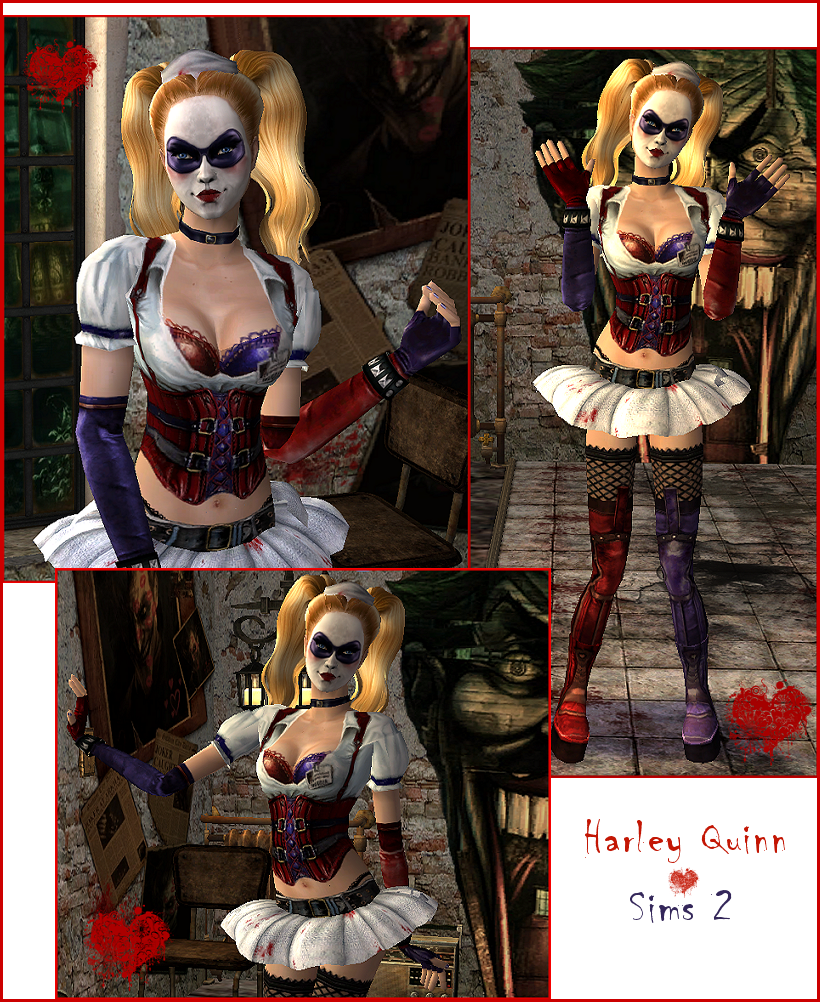 Published:
These are the skins I made for my Harley Quinn Sim from the videogame Batman: Arkham Asylum. I created her mask, nurse hat, wristbands, choker and outfit.

they didnt work for me. i tried all of yours. the only one that worked was poison ivy. but it wouldnt work in the game. the outfit was no exsistent and so was the face and hair, that i downloaded

Wow this is amazing.
could I please have the download file link?
Mod the sims won't open on my computer or laptop for some reason :/
Sours: https://www.deviantart.com/trestaure/art/Harley-Quinn-Sims-2-151020933

Our entire team. When we in full force discussed the plans I had developed, my knees were shaking and my lower abdomen was cramping with sweet languor. At the evening, V. made a speech in which he congratulated us all on the successful start of our activities, wished us further prosperity and forbade us to talk about work today.

Promising to fine us for it.

Kate lifted the guy's torso, and Scarlett gave the guy a few light punches with her fists between the legs. Kate soon did the same, and Scarlett struck the final kick. After that, the guy just bent over in pain, and the girls laughed at it a lot. Then Kate and Scarlett decided to give the thin guy a break.

And call the fat man instead.

To achieve this ambitious goal, tongue, hands, mechanical devices, and other helpers are used, although God himself was not offended either by the size of his dick or by an. Erection. This hefty fifty-year-old guy is able to fuck for several hours in a row, interrupting for a short time only to smoke or toss a pill of validol under his tongue.

While I was spinning around the Koptevsky market in search of the right address, my imagination drew up the most bizarre versions of the upcoming poebushki.

The stranger at this time pressed the stop button and the elevator stopped between floors. He lifted her skirt and, kneeling down, began to fondle the clitoris with. His tongue. Lips wrapped around him, tongue bypassed all the most sensitive places.

How to pronounce equipped