Centralized multi-site management via the cloud

The Cisco Meraki cloud-managed architecture enables plug and play branch deployments and provides centralized visibility and control across any number of distributed locations.

Each device downloads its configuration via the Cisco Meraki cloud, applying your network and security policies automatically so you don’t have to provision on-site. Wireless APs optimize their RF configuration based on the environment, and switches integrate seamlessly into existing RSTP domains.

Adding new sites to a network takes minutes, not hours or days, and there’s no need to train additional staff to monitor or manage the remote networks. 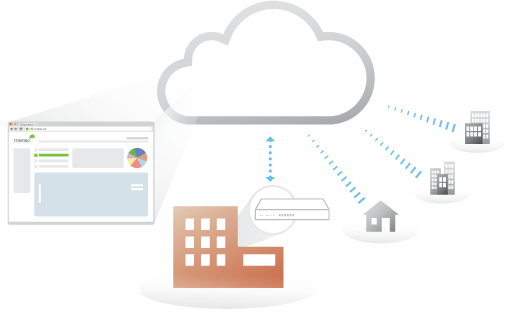 Site-to-site connectivity is established through a single click in the Cisco Meraki dashboard. Gone are the configuration headaches of traditional site-to-site VPNs: route discovery, authentication, and security policies are all handled automatically from the cloud. Full- and split-tunnel VPNs are configured with a single drop-down, and new sites are added with a few simple clicks. 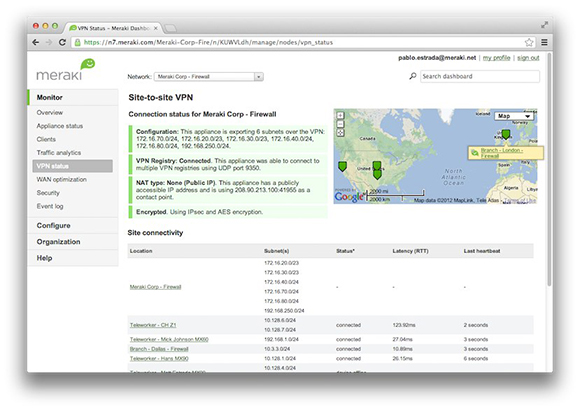 Managing deployments of hundreds or thousands of networks is simplified by the dashboard. Administrators can tag networks based on region, usage, type, or any parameter to organize networks. Searching for a group of networks is as simple as searching for a tag, easing the burden of monitoring and configuration for organizations that have large, distributed deployments. 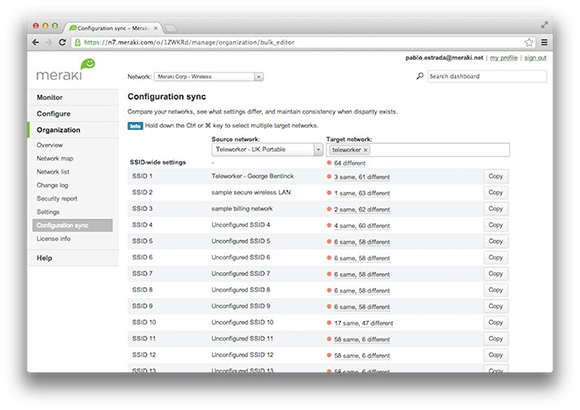 A state-of-the-art WAN optimization engine uses advanced algorithms, deduplication, compression, and hard-disk based caching to make the WAN feel like a LAN.

Cisco Meraki’s WAN optimization aids in server consolidation and private cloud initiatives, as well as any distributed network where end user bandwidth costs or performance are a priority. Enable WAN optimization on the MX with just two clicks – without new appliances, training, or overlay systems. 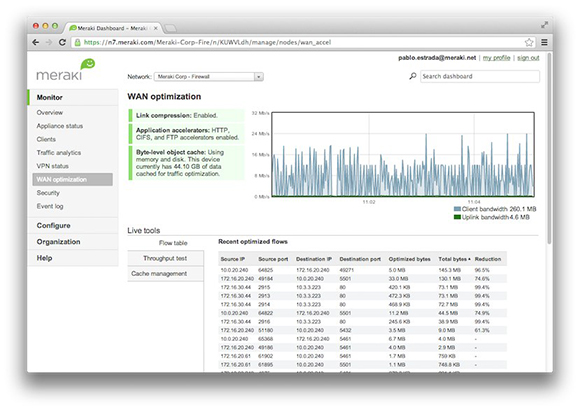 Control over applications, users, and devices

Cisco Meraki also provides insight into the users on the network, identifying clients by device type (e.g., iPads) and even username. Inspect, throttle, or block users, and integrate with Active Directory to apply different policies to different classes of users.

Built-in tools deliver remote diagnostic information in real time. Monitor RF conditions, measure ping and throughput performance, and identify active clients or ports - all right through the dashboard. You can even block clients from accessing the network with a single click. 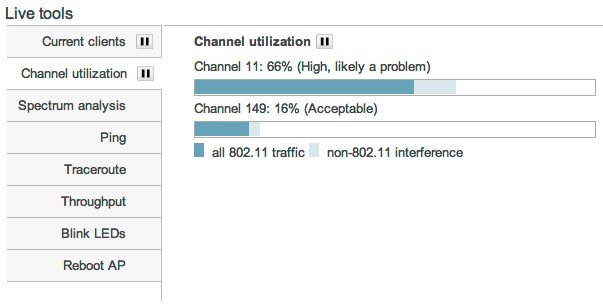 Each Cisco Meraki device is automatically monitored from the cloud, with continuous testing for WAN connectivity, latency, and more. The Cisco Meraki dashboard notifies you of problems via email alerts, and provides rich web-based diagnostics to troubleshoot your network from any web browser.

Role-based administration lets administrators appoint personnel for specific subsets of an organization, providing read-only access to reports and troubleshooting tools, guest access control via the Cisco Meraki Guest Ambassador, or full access to configuration changes on the network. Additionally, the dashboard keeps logs of the time, IP, and approximate location (city, state) of logged in administrators. Role-based administration reduces the chance of accidental or malicious misconfiguration and restricts errors to isolated parts of the network. 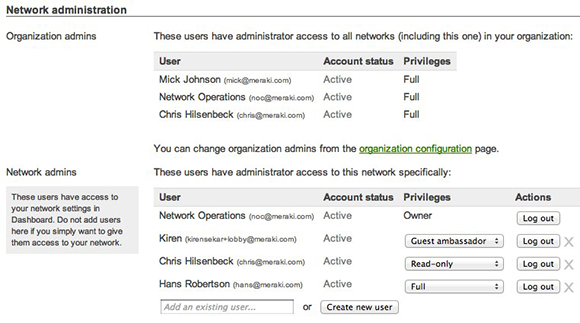 A searchable configuration change log indicates what configuration changes were made, who they were made by, and in which part of the organization the change occurred. Auditing configuration and login information provides greated visibility into your network and keeps records of events as required by security standards and best-practices. 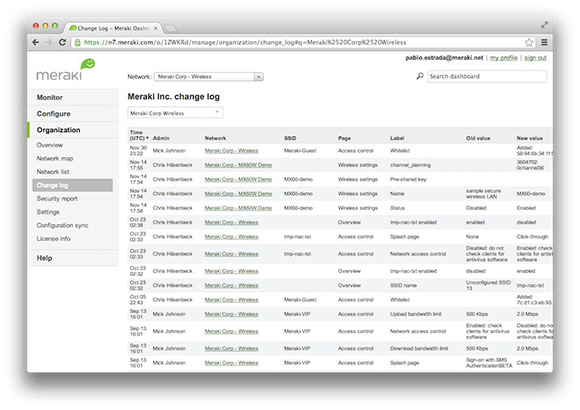 Firmware updates are delivered seamlessly from the cloud to Cisco Meraki devices. When firmware updates are available, an administrator simply schedules an appropriate time for devices to download and install the new version, eliminating insecure and out of date firmware.

OK, So I recently deployed a Cisco Meraki MX84 for client VPN. If I connect to a Windows 7 laptop using full-tunnel, everything is fine (I can access LAN resources over VPN) but if I use split tunneling (disable "use remote gateway" in Windows), and add a persistent route on the client laptop to route all LAN traffic to the remote gateway, the VPN stops working after a connect-reconnect (or reboot) the laptop. I have found the issue to be the 'Interface' in the route command has to be set for the route command. Example:

The ' 192.168.15.59' is the IP dynamically assigned to the client laptop by the VPN tunnel and it changes. I cannot hard code it to run it as a batch file everytime a remote user connects to the VPN. I have also tried to add the Interface number,

but, the '0x2d' is also dynamic and changes when the tunnel reconnects.

Is there a way I can use a static value for the Interface value?

Drop down: Show All Files

Cisco Meraki Client VPN only establishes full-tunnel connections, which will direct all client traffic through the VPN to the configured MX. As such, any content filtering, firewall or traffic shaping rules will apply to the VPN client's outbound traffic.

For remote teleworkers or users whose traffic should not be restricted in the same manner, clients can be configured to use a split-tunnel connection to direct traffic through the VPN only if necessary: Note: This configuration involves manually adding entries to a client's route table, and should only be followed by users with a thorough understanding of routing mechanisms.

First, modify the properties of the VPN connection to not be used as the default gateway for all traffic:

Next, add routes for the desired VPN subnets. This should be done with the VPN tunnel connected:

Use the same command, replacing "add" with "delete" to remove the route.

First, disable full tunnel (all traffic over the VPN):

To verify that the route was added take a look at the routing table, the new subnet should now have an entry. The route table can be accessed by typing "netstat -r": Note: These steps will have to be entered each time the VPN is brought up, but they can be defined in a script to make the changes quickly when needed. The specific process for this will be highly dependent on the operating system, tools available, and administrator preferences.

Cisco Meraki’s unique auto provisioning site-to-site VPN connects branches securely with complete simplicity. Using IPsec over any wide area network, the MX links your branches to headquarters as well as to one another as if connected with a virtual Ethernet cable. Customers accessing or moving services to the Amazon Web Services cloud can use Auto VPN to connect directly to a virtual MX inside their Virtual Public Cloud.

MX Security Appliances automatically configure VPN parameters needed to establish and maintain VPN sessions. A unique cloud-enabled hole-punching and discovery mechanism enables automatic interconnection of VPN peers and routes across the WAN, and keeps them updated in dynamic IP environments. Security associations and phases, authentication, key exchanges, and security policies are all handled automatically by MX VPN peers. Site-to-site connectivity is established through a single click in the Cisco Meraki dashboard. Intuitive tools built in to the Cisco Meraki dashboard give administrators a real-time view of VPN site connectivity and health. Round trip time latency between peers and availability status information automatically keep track of all the VPN peers in the network.

Configurations for split-tunneling and full-tunneling back to a concentrator at headquarters are fully supported and configured in a single click. Hub-and-spoke and full mesh VPN topologies give deployment flexibility, and a built-in site-to-site firewall enables custom traffic and security policies that govern the entire VPN network.

The heat apparently took its toll and I do not remember how I fell asleep in this image. Since I lived in debt, I was not used to closing the door. I woke up from someone's gaze and with horror, feelings of shame and lust, I saw that Dmitry was standing at the door.