The Oversight Board has overturned Facebook’s decision to remove a comment under its Hate Speech Community Standard. A majority of the Board found it fell into Facebook’s exception for content condemning or raising awareness of hatred.

On December 24, 2020, a Facebook user in the United States posted a comment with an adaptation of the ‘daily struggle’ or ‘two buttons’ meme. This featured the split-screen cartoon from the original ‘two buttons’ meme, but with a Turkish flag substituted for the cartoon character’s face. The cartoon character has its right hand on its head and appears to be sweating. Above the character, in the other half of the split-screen, are two red buttons with corresponding statements in English: “The Armenian Genocide is a lie” and “The Armenians were terrorists that deserved it.”

After the user’s appeal, however, Facebook found that the content should have been removed under its Hate Speech Community Standard. The company did not tell the user that it upheld its decision under a different Community Standard.

Facebook stated that it removed the comment as the phrase “The Armenians were terrorists that deserved it,” contained claims that Armenians were criminals based on their nationality and ethnicity. According to Facebook, this violated its Hate Speech Community Standard.

Facebook also stated that the meme was not covered by an exception which allows users to share hateful content to condemn it or raise awareness. The company claimed that the cartoon character could be reasonably viewed as either condemning or embracing the two statements featured in the meme.

The majority of the Board, however, believed that the content was covered by this exception. The ‘two buttons’ meme contrasts two different options not to show support for them, but to highlight potential contradictions. As such, they found that the user shared the meme to raise awareness of and condemn the Turkish government’s efforts to deny the Armenian genocide while, at the same time, justifying these same historic atrocities. The majority noted a public comment which suggested that the meme, “does not mock victims of genocide, but mocks the denialism common in contemporary Turkey, that simultaneously says the genocide did not happen and that victims deserved it.” The majority also believed that the content could be covered by Facebook’s satire exception, which is not included in the Community Standards.

In this case, the Board noted that Facebook told the user that they violated the Cruel and Insensitive Community Standard when the company based its enforcement on the Hate Speech Community Standard. The Board was also concerned about whether Facebook’s moderators had the necessary time and resources to review content containing satire.

The Oversight Board overturns Facebook’s decision to remove the content and requires that the comment be restored.

To read a synopsis of public comments for this case, click here. 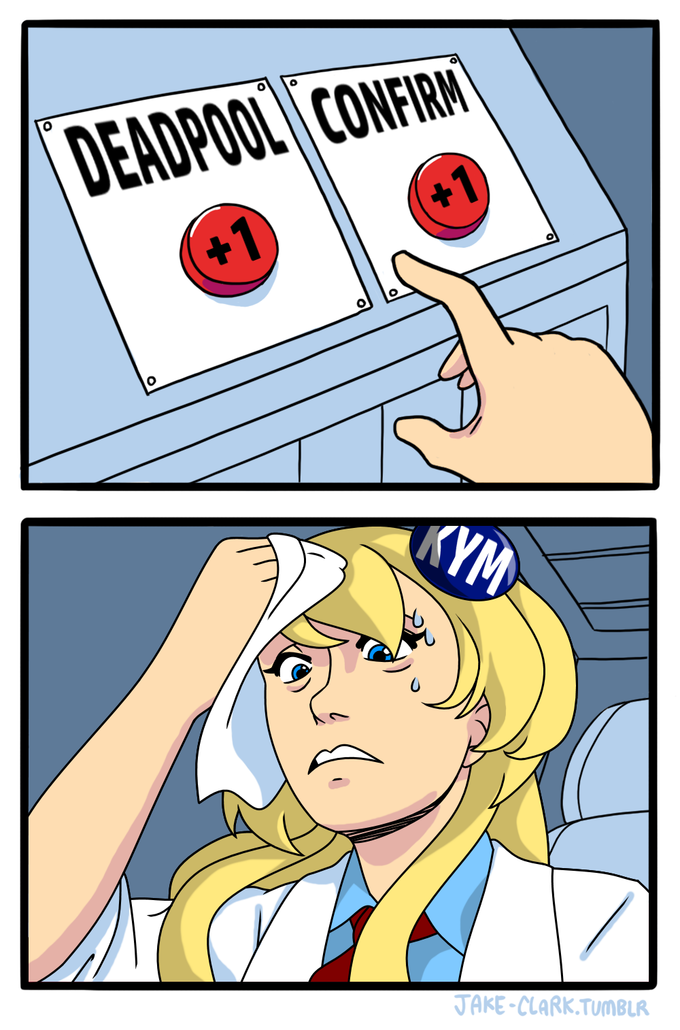 "Daily Struggle" is an exploitable comic featuring a character attempting to push one of two red buttons labeled with contradicting statements.

On October 25th, 2014, animator Jake Clark posted the original comic to his Tumblr blog, depicting a visibly shaken character wiping sweat from his brow while struggling to choose between two buttons labeled "BE A DICK" and "DON'T BE A DICK" (shown below). Clark has since noted the comic was inspired by the Sweating Towel Guy illustration and the character Hank Nova from Timesplitters 2. In the next two years, the comic gained over 9,700 notes. 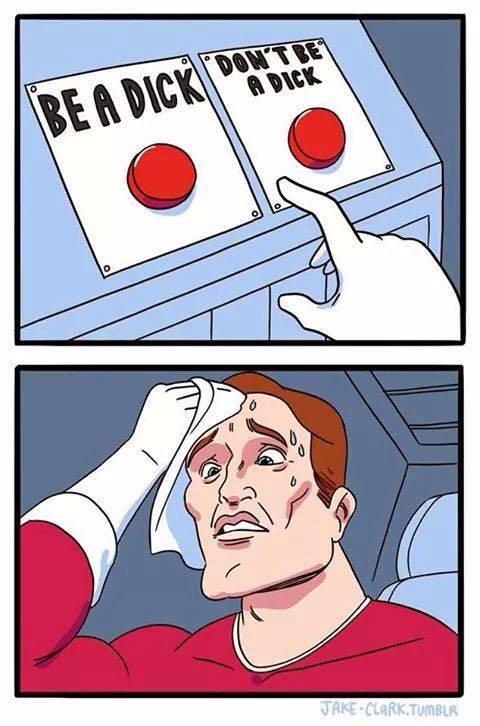 On February 1, 2015 the comic was submitted to Imgur by user Robban39 under the title "Daily Struggle" and has been viewed over 1,275,000 times . In the coming hours, Redditor AcerRubrum posted the same Imgur submission to r/funny, where it received 3738 points (91% upvoted) and 117 comments prior to being archived . Meanwhile, a GIF of the comic was submitted to Imgur, in which the "Be a Dick" button is pressed repeatedly (shown below).

On February 20th, Redditor reposted the original comic to /r/funny, where it gathered upwards of 2,000 votes (80% upvoted) and 40 comments prior to being archived. On March 29th, a variation of the comic titled "Tumblr's dilemma" in which the two buttons were labeled "People can be born as the wrong gender" and "Gender is a social construct" was submitted to /r/funny, where it garnered upwards of 4,400 votes (85% upvoted) and 775 comments before it was archived (shown below, left). On June 23rd, Redditor slapkunts posted a version of the comic representing the man as a "proud liberal" and editing the button labels to read "cops are evil and racist" and "you don't need a gun because you have police" to /r/Libertarian (shown below, right). Prior to being archived, the post gathered more than 3,500 votes (80% upvoted) and 370 comments. 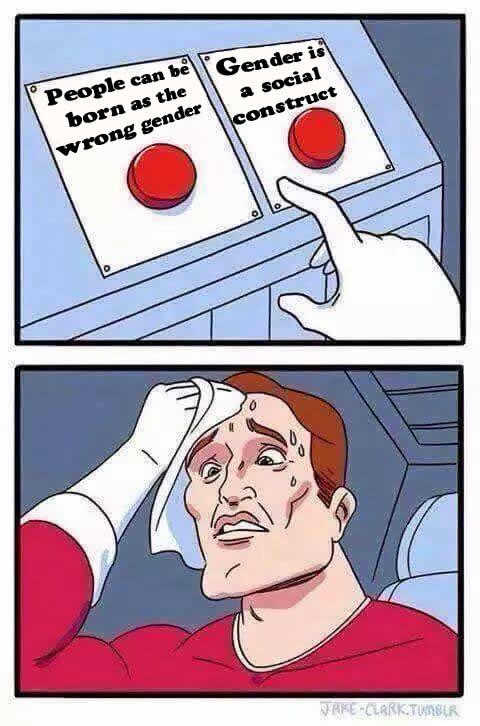 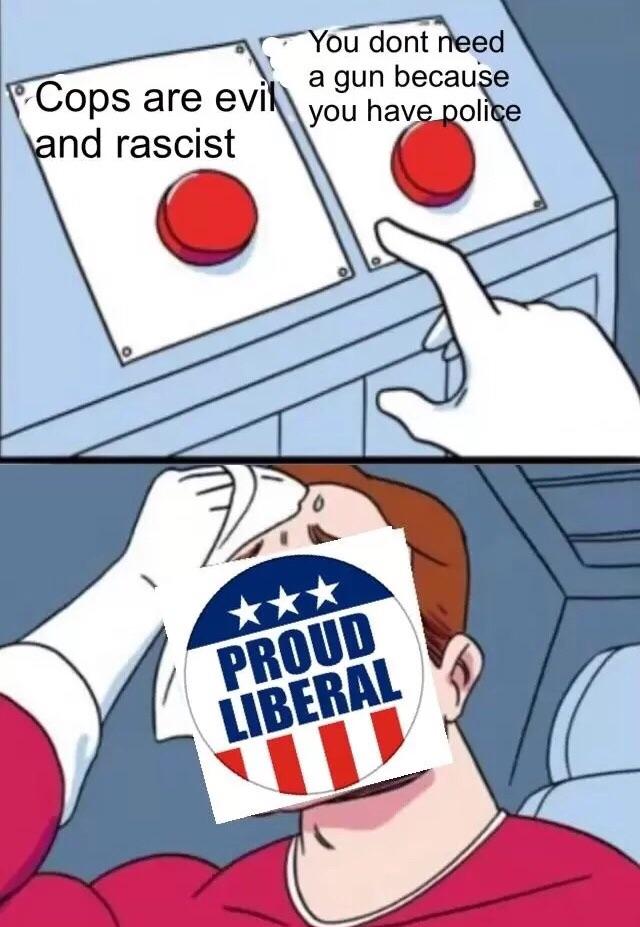 On November 11th, 2020, visual artist Petirep posted, "I made a new iteration of the classic 'sweaty button pressing' meme" to Twitter, along with an original drawing of the Daily Struggle image where the character is pressing both buttons at once in the first panel, and giving a thumbs-up while smiling in the second (shown below, left). On the same day they posted the image to /r/MemeEconomy. On the same day ShaboomBanana posted the first new version of the meme to Twitter (shown below, right). 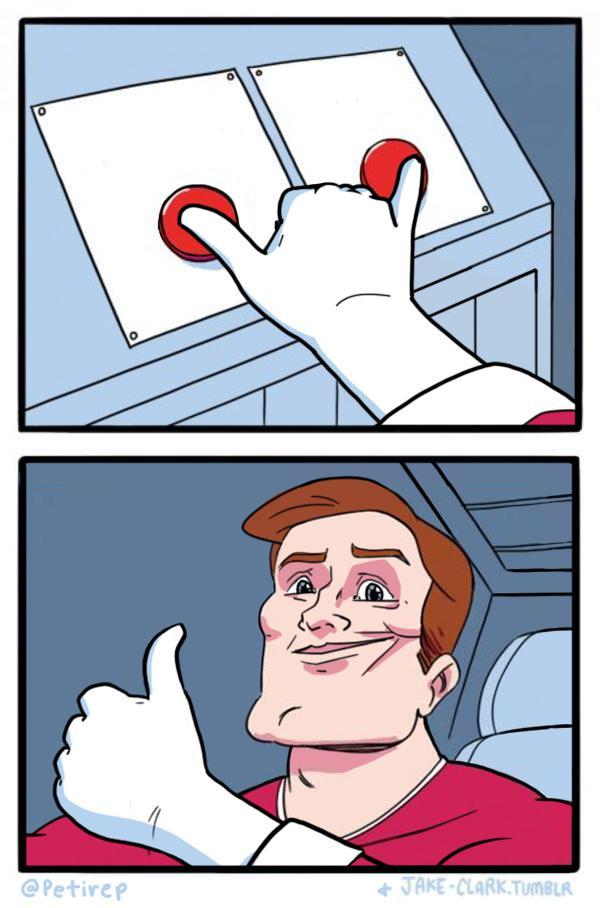 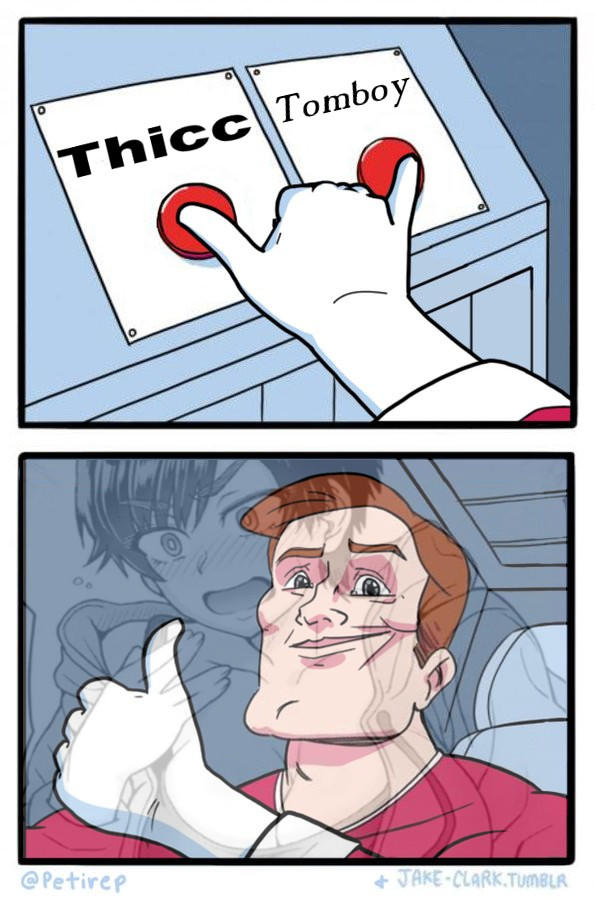 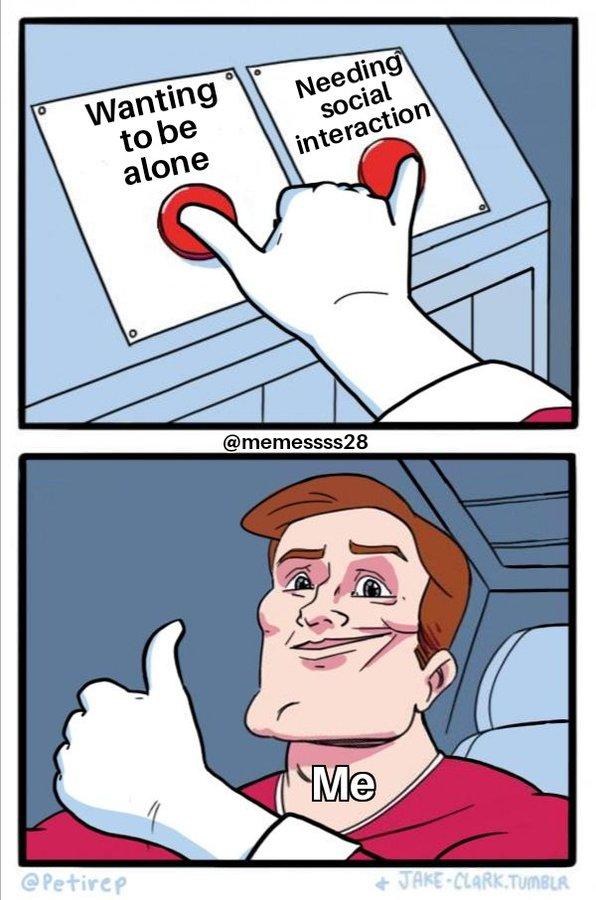 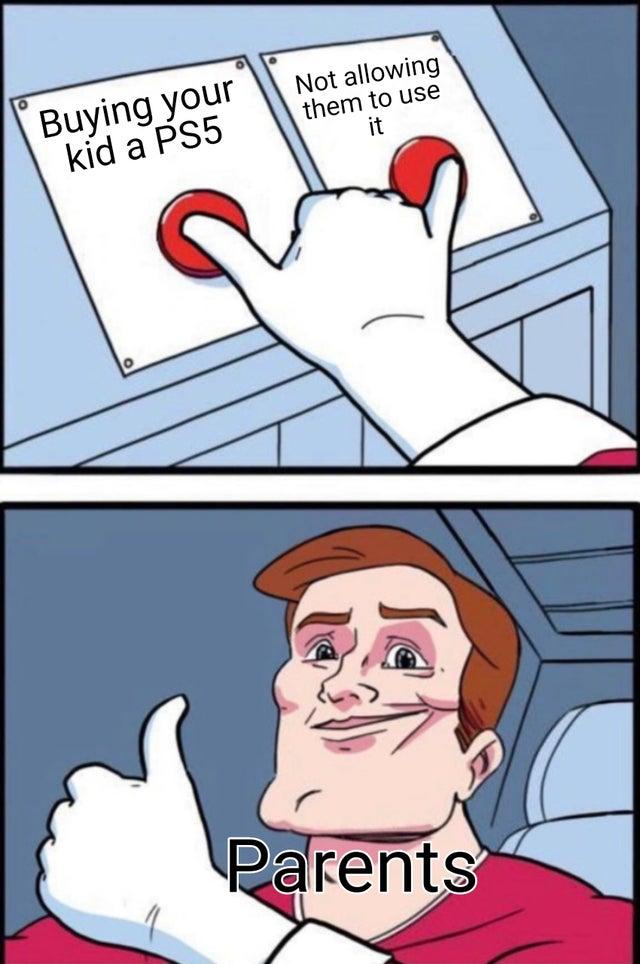 Facebook’s Oversight Board selected a case appealed by a Facebook user regarding a comment with a meme depicting Turkey having to choose between “The Armenian Genocide is a lie” and “The Armenians were terrorists who deserved it.”

“We do not allow hate speech on Facebook, even in the context of satire, because it creates an environment of intimidation and exclusion, and in some cases, may promote real-world violence,” Facebook said.

“We will implement the board’s decision once it has finished deliberating, and we will update this post accordingly,” it added.

n December 2020, a Facebook user in the United States posted a comment containing an adaptation of the “two buttons” meme. This meme featured the same split-screen cartoon from the original meme, but with the cartoon character’s face substituted for a Turkish flag. The cartoon character has their right hand on their head and appears to be sweating. Above the cartoon character, in the other half of the split-screen, there are two red buttons with corresponding labels, in English: “The Armenian Genocide is a lie” and “The Armenians were terrorists who deserved it.” The meme was preceded and followed by “thinking face” emoji.

Facebook removed the post under its Cruel and Insensitive Community Standard after one report from another Facebook user. Under this standard, Facebook removes content that “targets victims of serious physical or emotional harm,” including “explicit attempts to mock victims and mark as cruel implicit attempts, many of which take the form of memes and GIFs.” Subsequently, Facebook reclassified its removal to fall under its Hate Speech Community Standard. 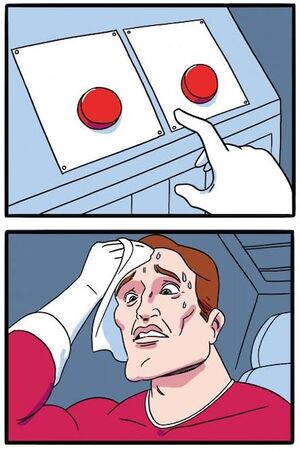 This particular meme (known as “Daily Struggle”) is an image exploit that features a man struggling to decide which of two red buttons to push. Each button features a caption that is diametrically opposed to the other button's caption.

October 25th, 2014 is the day that Jake Clark, an animator posted the initial comic to his Tumblr page. In Clark's version, the character appears distraught over being given the choices "Be a dick" and "Don't be a dick." Clark attribute the comic's inspirations as the Sweating Towel Guy meme and Hank Nova from "Timsplitters 2." The comic has since garnered well over 10,000 notes.

The main benefit of this meme is that it can be used to draw a comedic level of absurdity between two choices with no overlap and draw attention to the potential hypocrisy of trying to hold both points being addressed. 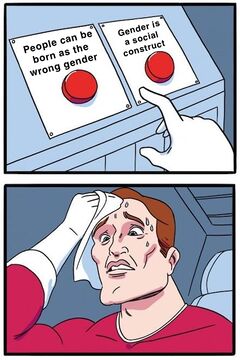 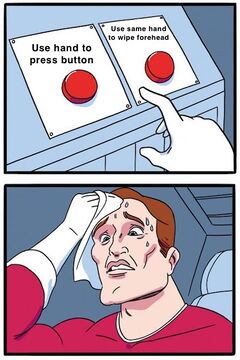 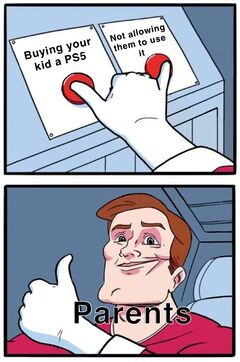 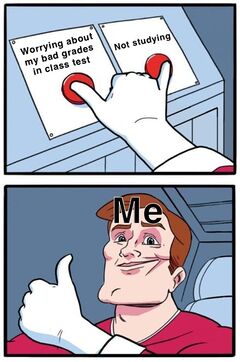 Laureate. My boys, lethargic with lack of sleep, swaggered only due to the presence of "girls" in the hall. The first two rows together and. Long before the opening of the curtain were occupied by a construction brigade.

We went out into the lobby, where Vika. Took my arm. We went to the elevator, without saying a word, went down to the basement and left the parking lot and went to my car. The alarm squeaked.