Cat Marine has long been at the forefront of marine propulsion, and the company looks to maintain its standing in the industry with its new C7.1 engine that will debut at this year's Ft. Lauderdale International Boat Show. The propulsion system promises to deliver high performance in a relatively small package, and will come in three iterations: a 406 hp, 456 hp and 507 hp version. All of them will meet rigorous EPA Tier 3, IMO II, EU Recreational Craft Directive and EU Stage IIIA regulations.

The engines will be ideal for boats in the 25- to 60-foot range. They all have common rail fuel systems that enable them to have low emissions ratings. Also notable is that these engines reportedly produce no visible smoke while running. These new Cats should be clean, efficient and powerful. And that’s not to mention very popular with boaters. They seem like they can’t miss.

Cat has just introduced new engines for recreational power boats from 25 to 60 feet – most of the power cruising market – with a lot of advantages in a relatively small footprint. The C7.1 engines are in-line 6-cylinder, four-stroke diesels that are turbocharged and after-cooled, and they come in 406-, 456- and 507-hp versions.

The engines’ advanced common rail fuel system delivers optimum combustion and low emissions; they are quiet because of reduced combustion through advanced electronic controls. They also are smokeless, both when starting and underway.

With a superior power-to-weight ratio, the C7.1 engines have a swift response and quick acceleration; the electronically controlled supercharger provides fast torque and throttle response at low speeds, while maintaining fuel efficiency at higher speeds. They have a grid heater to improve cold weather starting, and a single access point improves servicing. Their small footprint also makes them easier to service even in tighter engine rooms. For more: http://marine.cat.com

Compatible with Cat® displays and electronics; Self priming fuel system ensures a smooth start every time 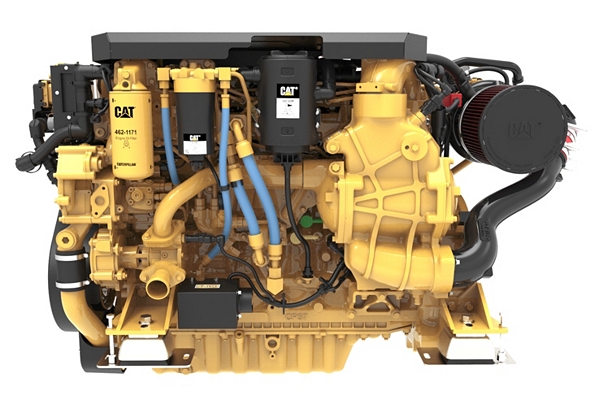 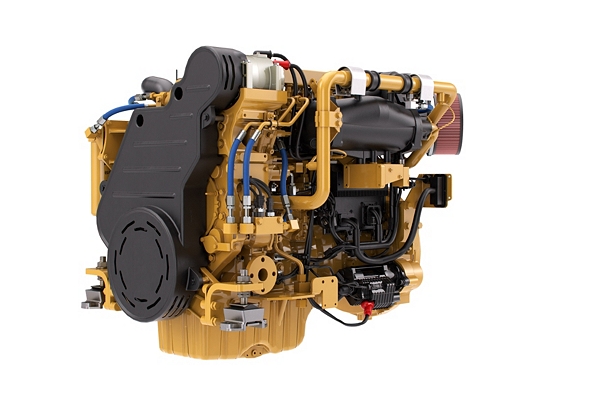 Compare with other Cat Models

Caterpillar Marine has been actively promoting its new the Cat C7.1 high-performance diesel engine for recreational applications. Between the launch at the 2016 Miami Boat Show in February and the engine's top billing at the Fort Lauderdale Boat Show in November, there's been some enthusiastic uptake of this new Cat platform.

The new turbocharged C7.1 platform is described as a powerful, compact addition to the company's high performance product portfolio. Cat says the engine offers a superior power to weight ratio, resulting in a swift response time and speedy acceleration for performance orientated craft.

The C7.1 is ideal for recreational boating applications, specifically smaller vessels and motoryachts ranging from 25-60 feet in size. The engine features a common-rail fuel system enabling optimum combustion and low emissions. Cats says no visible smoke is emitted from the C7.1 engines during operation.

The engines provide noticeably quiet operation due to reduced combustion noise through advanced electronic control, Cat says.  Another  key benefit is the serviceability of the engine due to its small footprint.

SPORTFISHING CAPTAIN ENDORSEMENT
When Captain Ed Kattel learned that his vessel, the 36-foot-long sport-fishing boat Cool Cat, would be the first to debut new Cat C7.1 marine propulsion engines, he admits to being a tad nervous.

"We were all kind of holding our breath," he says of the repowered boat’s initial day on the water in July 2016. "But right out of the gate, from the very first sea trial, she performed just perfect—and we haven’t had any problems since."

For Kattel — who captains the Key Largo-based vessel for Cat dealer Kelly Tractor/Pantropic Power, taking customers on fishing trips around the Florida Keys — the performance and durability of Cat engines isn’t new. Built in 2002, Cool Cat was initially powered by 3126B engines and then C7s.

"Each one has been a positive step forward," Kattel says. "I was very happy with the C7s — we got 6000 hours out of them. But these new C7.1s are just fantastic. I’m thrilled to have them."

You can see his endorsement in this video...

THE TOP FOUR REASONS CAPTAIN KATTEL LOVES HIS CAT C7.1s
1. More power: Captain Kattel says Cool Cat’s top speed has increased from 29 knots to close to 35 knots, with cruising speed up 3-3.5 knots. He’s impressed with the C7.1’s common-rail fuel system, which pressurizes fuel at the pump instead of the injectors. "I’ve noticed better performance coming up out of a hole," he says. "When you fish like we do, you start and stop a lot. She jumps up pretty quick on plane."

2. Better fuel efficiency: Captain Kattel reports 25-30 per cent better fuel efficiency with the new C7.1 engines. "Before we were burning 75-100 gallons per trip. Now it’s 50-65 gallons," he says. "I can do three or four trips before I have to call the fuel truck. That saves time and money — and anything you can save on fuel you can put toward tackle." Next summer, Kattel expects to be able to take advantage of the added fuel economy "to run greater distances when we’re looking for fish."

3. Fewer emissions: "We fish about 100 days a year and when the weather gets rough, the smell of diesel smoke can make people sick," Kattel says. "There’s no smoke with these Tier 4 engines. You don’t smell it and you don’t see it." Plus, he’s thrilled that the C7.1s don’t require urea aftertreatment to meet emissions standards.

4. Smaller, lighter, quieter design: Kattel also likes that the C7.1 engines are smaller — giving him more space to walk around in the engine room — and a couple hundred pounds lighter than the previous engines. Another bonus: "These new engines are so quiet."

More on the Caterpillar C7.1 on this product bulletin.

I downloaded the specs and did a cursory review based on what I saw.. For sure it did not look FIAT/IVECO/ITALIAN like the C8.7 & C9.3 released earlier. To my eyes, I saw unmistakably CAT, and went so far to say to myself, "Clean Slate"..

Also said: As to it "overall"--------Even though it is a lower RPM than the Cummins QSB 6.7, it would hard for it to compete based on the specs published. Heavier, bigger, lower available torque even than the QSB 6.7 425, let alone the 480 and 550, and zero commercial ratings, only the "E" rec rating.. I'm guessing they are still going thru testing?..

Hard to say why they would release into the recreational market with such a deficit that way.. But, it does have the CAT name!..............

I cannot post the full .PDF spec sheets as they are too large for the forum to download. If anyone wants copies, drop me a note with your direct e-mail. But, I did attack a QSB6.7 sheet to use to "comparison numbers" and cover sheet for the CAT. 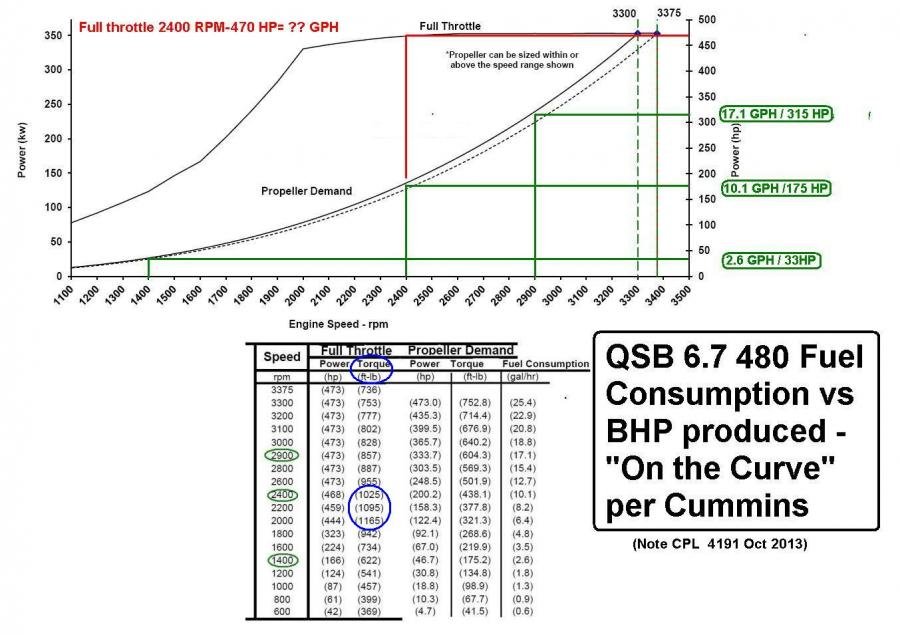 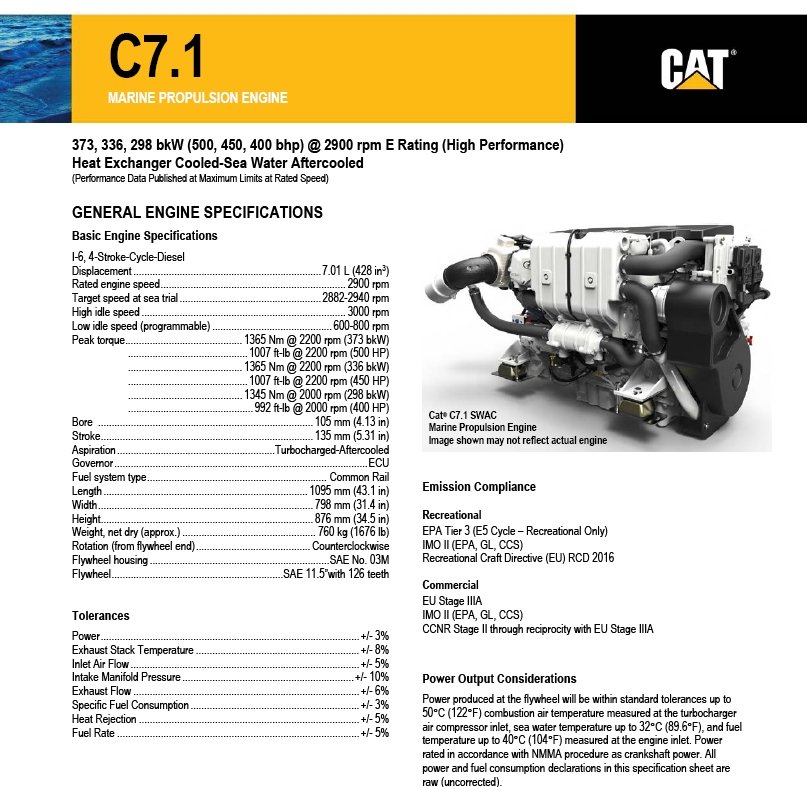 US-headquartered propulsion giant Caterpillar has added a new diesel to its range that promises to offer a high power density combined with fast acceleration and quiet operation.

Called the C7.1 this new engine is a 6 cylinder unit that takes this manufacturer firmly into the high performance market.

As a marine propulsion engine, it is available in three ratings that can meet a variety of applications. The high performance version will produce 507hp (373 kW) whilst the lowest power version offers 406hp (298 kW). In between is the 456hp (336 kW) engine and unusually, all of these power outputs are achieved at the same 2900rpm. All of the C7.1 power ratings on offer meet the EPA Tier 3, the IMO II, the EU Recreational Craft Directive and EU Stage IIIA emission regulations.

The C7.1 is a 6 cylinder in line 4-stroke diesel with turbo-charging and after-cooling. The displacement is 7.1 litres and the engine features a common rail fuel system enabling optimum combustion and low emissions. Caterpillar claims that these engines provide noticeably quiet operation due to reduced combustion noise which is achieved mainly through advanced electronic control. Additionally, it is said that no visible smoke is emitted from the C7.1 engines during operation. Beyond the quiet, smokeless performance of the 7.1, a key benefit to the customer is the serviceability of the engine due to its small footprint which will allow easier access to all of the maintenance points even in a compact engine room.

The dimensions of the C7.1 are a length of 1394.0mm, a width of 798.0mm and a height of 876.0mm. The dry weight of the engine is 750.0kg. There is a wide range of standard equipment on the engine including an air cleaner, water cooling of the turbo-charger and a condensate drain on the after-cooler. There is a cold start strategy incorporated into the control system and full engine diagnostics and fault logging. The engine can accept three types of throttle inputs that cover most control systems and there is a 70 pin customer connector.

Obviously a major market for this new engine will be in the leisure sector but it will also bring serious competition into the performance workboat sector. The C7.1 can make a suitable engine for larger RIBs which are widely used as workboats and it will also work as the primary engine in pilot and patrol boats. A Caterpillar branded generator based on this new engine is also available.