3rd Strike is by far my favorite video game. I've dreamt about a real trueHD version many times. I had thought about redrawing the sprites of the selection menu since they are unique and don't appear anywhere else in the video game. When CAPCOM announced that they were about to launch the online version I assumed that they were about to implement my idea. I was surprised to find that the original sprites were disposed off and replaced by other new ones. Seeing as CAPCOM developed another idea, I felt forced to make my own version from a more purist stand-point. The final result was exhibited at the GAMER Art Exhibition of 2012 by Poster Punch.

Forgive me if this was said already, but Garou runs on the MVS hardware released in 1990, and 3rd strike runs on CPS3, which came out in 1996. This is a full console generation worth of time later (and we all know arcade hardware was advancing really fast back then). The fact that we can even have a discussion like this is a testament to the sheer artistic will of the Garou team.

I refuse to vote. These are the two most beautifully animated 2D fighting games of all time imo.

Artistic progress is there but you're not going to impress anyone with a new 2D machine targeting '240p' (Neo Geo 320x224 / CPS3 384×224*) even if the hardware is more powerful and geared towards 2D games. Pixel art and 'hand-drawn animation' remained a massive time and cost sink when CPS3 launched and 2D games at that res had been tapped out (not stylistically speaking).

There was no longer anywhere left to technically innovate and wow people when it came to sprite/240p games.

Just to pushback on people knocking CPS3, Warzard might be a better showcase than the Street Fighter 3 games when it comes to crazy sprites and colour use. It would have been interesting to see what could have been done on the CPS3 had it had a longer life and tried games other than 1 v 1 fighters. 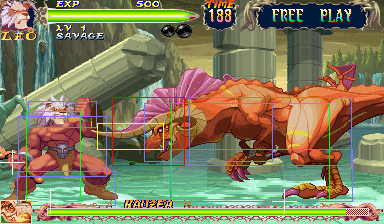 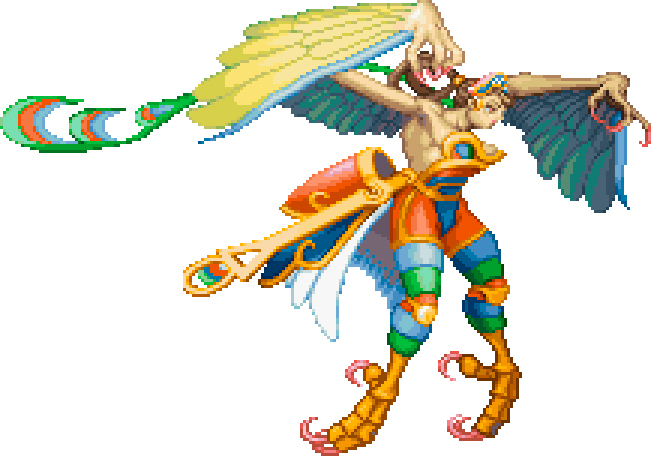 many colours, much tones 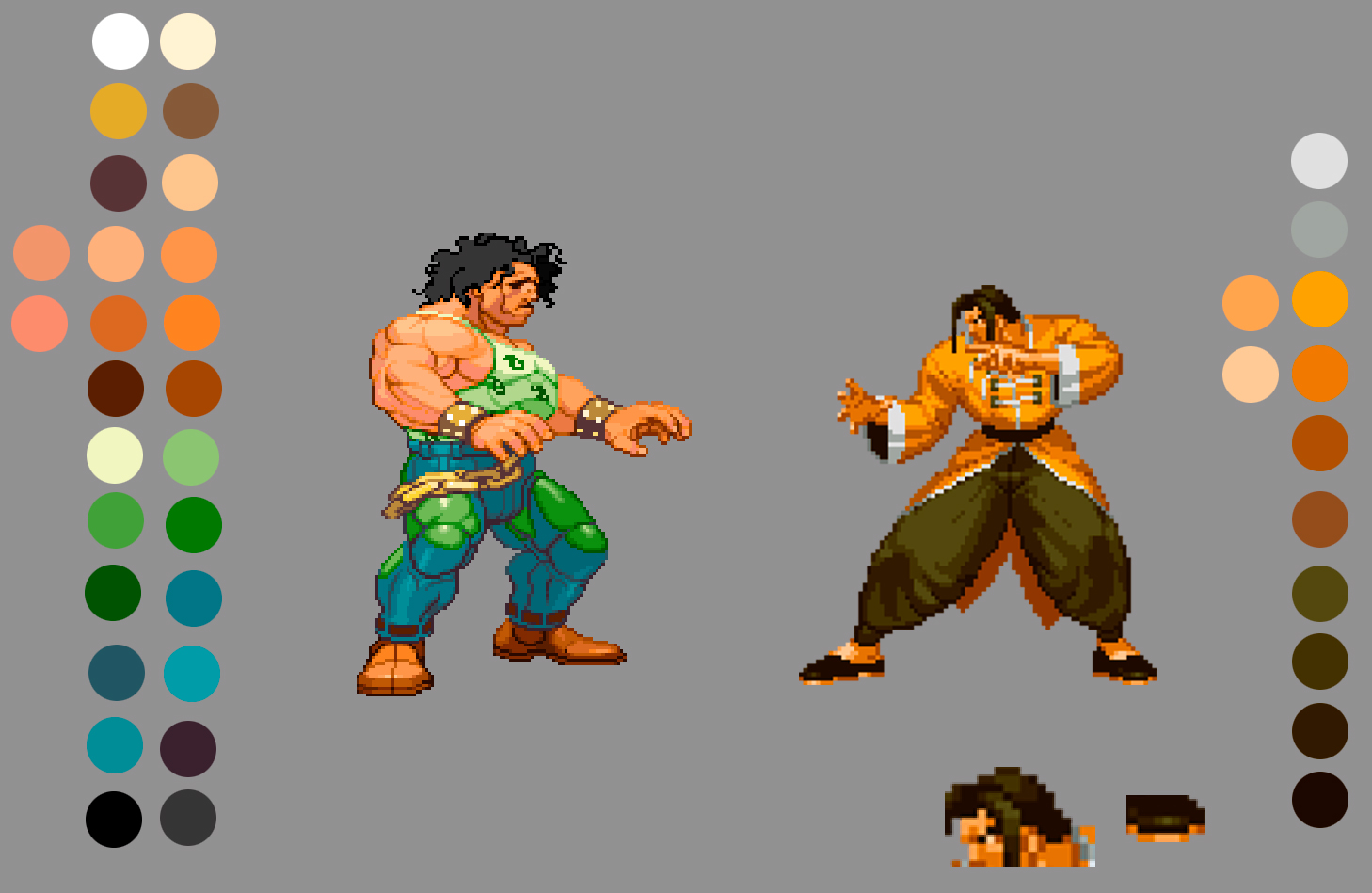 (this is a rough colour pick, some hues might be missing)
Check out the phenomenal use of colour tones on Gato, I hadn't even realised they used the same green tones of his pants on his shoe highlight (same goes for the hair). A masterclass in maximizing colour use to get around palette restrictions. Looking at SF3, it doesn't max out the 32 colour palette (iirc) limit that is on offer (maybe something in Warzard does) and it varies with the cast but I can't imagine doing sprite animation at this level with that many colour tones, the extra cost to really take advantage of what the CPS3 can do just doesn't make sense economically and visually, as demonstrated by people's opinions on here, is in 'diminishing returns' territory.

KOF XIII Animation does exceed 3rd Strike in fluidity and character IMO. The thing is that its a newer game and it had less limits than 3rd Strike and Garou, which both were made by the end of the 90s.

But IMO, KOFXIII is the one of the best Sprite based HD era Fighters out there.

IIRC it was just resolution and storage the main reasons why CPS3 was better.

I'm not 100% sure but I think Third Strike (80MB?) might be smaller than Garou (86MB). I'm going off the CPS3 Flash Ram size and assuming the CD writes all the data to that. Looking at dumped ROM sizes, Garou seems a little bigger than 3s. I think Capcom was struggling with space (cut moves/reused backgrounds) with 3s

I have to disagree with KOF13, It certainly has the better res but character (as in charm) of animation Garou and SF3 are, for me, superior

Check out the blowback on Terry's jacket after the busta wolf

The ripple on his jacket here sells the force like nothing else (as an aside, KOF13 has some egregious use of FX that completely cover the characters. Garou's staging/blocking here is clear even with the fireworks going off)

The cloth feels really static on most of the cast, compared to Garou, I feel like they're keeping fold movement to a minimum because, understandably, it's expensive and time-consuming to do. Here's Kims cool looking idle where they did go all out:

Same goes for the attacks, the secondary/overlap animation is a little lacking compared to those two titles.

Just to shine some light on 3s, the exaggerated animations are so good, the way hits are sold in a variety of ways hold so much charm:

Totally different in tone to what SNK went for with Garou but Capcom really shines here. Check out the insane smears that the game has going on 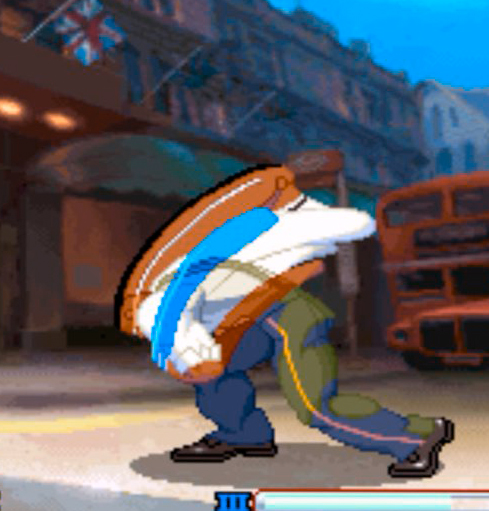 Can’t hate on a guy that’s just doing this for fun in his spare time.
HDR they were trying to give it a completely new look, I wish they tried to make the game look like the character portraits, instead of the animefied look.

Not hating on him. I think he came really close on the 2nd to final pass, if he added some flat shading and brightened it up using the same color palette as the original, would have been close to perfect.

I also fully agree on ST. I really wish they stuck with the style that was in the intro (that sick ass looking Ryu) and the character portraits. Instead we got HDR

one of the ugliest looking things I’ve ever seen in gaming, lol.

YEAH YEAH YEAH I said I'd update this space a long time ago, but I didn't. Anyway, here you'll find sprite packs of all the characters. If you want select screen portraits, download them from here: www.zweifuss.com/select/select.zip . Sorry about that, I'll fix this space someday, I promise!

JASC PSP PAL files - (Updated March 17th) Simply apply these to the frames using 'MAINTAIN INDEX', to get strange and wonderful results. Some of these are named for some sprites I haven't released yet, such as the portraits, but they should be up soon (within the next week or 2)

JASC PSP PAL files 2 - These are from New Generation and 2nd Impact. I only named the first set for each fighter, I was too lazy to name the other 5 (or 6, in the case of 2nd Impact). I may not have extracted all the palettes there is, but those are all the ones I could find for the time being.

21 - All effects from the game - including fireballs, hitsparks, dizzies, super lightning, etc.

Having covered it, I got. Over to the opposite side from Seryoga. He raised his head and looked inquiringly at me, I waved my hand so that he lay down. There was not enough air, my hands were shaking, and my heart was pounding in my throat.

And our meetings with you, as if the sun's rays filled you and me. If I can hide these rays in myself, because I am experienced enough in the transfusion of light, then you are innocent. You have a hard life, you are very smart, but people do not always see you as a prince.