The Cardano network is based on an academically-conceived proof-of-stake (PoS) consensus mechanism called ‘Ouroboros’ that has been peer-reviewed, and the native currency of the network, ADA, can be stored and transferred using the Daedalus wallet.

The Cardano network is currently in its Shelley Development Phase, which follows the Cardano 1.5 release on the mainnet in March. The Ouroboros BFT consensus mechanism is subsequently transitioning to the Ouroboros Genesis stage, which will operate as the protocol for the Shelley era of development.

Shelley marks the beginning of the path to what Cardano references as ‘full decentralization’ of its network. Cardano has undergone meticulous development over the last few years, and the pending launch of the network is pegged for 2019. The Shelley testnet will come first, enabling third-party developers to test out applications and identify bugs before the full-scale mainnet launch of Shelley.

Importantly, Shelley represents the transition from federated centralized nodes in the Cardano early test networks to staking enabled for all ADA holders in the coming months.

Cardano is written in the programming language Haskell and is built in a multi-layered architecture. The base layer is the settlement layer of the network with the unit of account for ADA, which is linked to the ‘control layer’ that handles the smart contracts running on the network.

Token holders (i.e., ADA) can either directly stake, while online, or delegate their ADA to participate in the validation process of the network using the Daedalus or Yoroi wallets. Stake pool operators control delegated ADA corresponding to an on-chain certificate, but delegators still retain the monetary rights, and revenue generated, from their delegated ADA.

The Cardano Foundation is a Swiss-based organization whose mission is to drive adoption of the platform, shape legislation and commercial standards, grow the community, ensure stakeholder accountability, and forge partnerships. According to the foundation:

“Cardano Foundation is an independent body based in Switzerland with core responsibilities to help oversee and supervise the development of Cardano and its ecosystem. We are committed to protecting and promoting Cardano and advocating on behalf of the users and community of the protocol.”

Of the original 26 billion ADA tokens created, roughly 5.1 billion were allocated to the three teams working on Cardano’s development. The total supply is capped at 45 billion tokens, and the additional tokens leading up to the cap will be issued via the PoS validation process (i.e., block rewards) over the next 24 years.

Create a Daedalus wallet in a few quick steps and start holding your ADA safely.

Daedalus is one of the most popular Cardano wallet applications in the community. Being open source and supported by Input Output HK, its one of the most trusted wallets to hold and manage your ADA.

Follow these easy steps to get started with delegating your ADA to a Stake Pool.

Ensure you are on the right website and not downloading a fake version.

Install the wallet app by opening it and following the instructions.

Click "ADD Wallet" from the bottom of the app, and select "Create a wallet".

Give your wallet a descriptive name and create a sending password. This password is used to confirm that it is you that is sending ADA from this wallet or participating on the network using the wallet.

Create your 24 word recovery word phrase. This recovery phrase is used to restore your wallet on a new device or on a different wallet app such as the browser version of Yoroi or the Yoroi mobile app. The same wallet can be used across multiple wallet applications.

Once you're done, you will need to sync your wallet with the Cardano network. The Daedalus app will download a local copy of the network to be able to quickly interact with it and pull in all of your wallets ledger activity. Since its a new wallet, you want see any transaction history.

You've now created your wallet ready to send, receive, delegate and vote with your ADA.

Learn how to delegate your Daedalus wallet to a Cardano stake pool.

Consider Delegating to Our Pool

We're a small, independent single stake pool operator. We've got a long way to go before we are completely self-sufficient and continuously producing blocks for the community. Our stake pool infrastructure costs money and time to support. Search for us with ticker: ADAOZ.

Learn how to delegate to us using Daedalus or delegate with the Yoroi wallets.

This website is only provided for your general information and is not intended to be relied upon by you in making any investment decisions. You should always combine multiple sources of information and analysis before making an investment and seek independent expert financial advice.

Some providers pay us for advertisements or promotions on our website or in emails we may send you. Any commercial agreement we have in place with a provider does not affect how we describe them or their products and services. Sponsored companies are clearly labelled.

Daedalus wallet is the open source wallet for ada (ADA - The cryptocurrency of Cardano), built to grow with the Cardano blockchain. Daedalus is a secure wallet for the ada cryptocurrency. Download and install the wallet so you can keep your ada safe. Daedalus is a full node wallet. This means that unlike light wallets (e.g.Yoroi, Adalite etc.) Daedalus downloads a full copy of the Cardano blockchain and independently validates every transaction in its history. That way you get maximum security and completely trustless operation, without centrally hosted 3rd party servers. Manage any number of wallets with our hierarchical deterministic (HD) wallet implementation. Have more control over how your funds are organized. Use our powerful back-up and restoration features to recover your funds if necessary. All major desktop operating systems are supported. Daedalus runs on Windows, macOS, and Linux. Themes allow users to customize the look and feel of the Daedalus wallet. 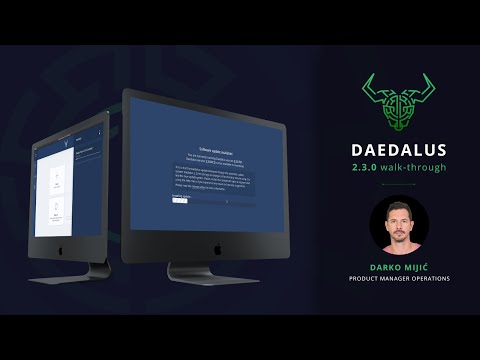 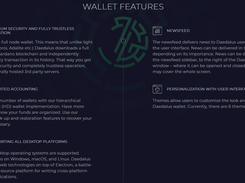 The VPN that just works. #1 Trusted leader in VPN. Enjoy unrestricted access worldwide. 30-day money-back guarantee. ExpressVPN defeats content restrictions and censorship to deliver unlimited access to video, music, social media, and more, from anywhere in the world. ExpressVPN hides your IP address and encrypts your network data so no one can see what you’re doing. One click, and you’re protected. A single ExpressVPN subscription comes with easy-to-use apps for every device you own. Mac, Windows, Android, iOS, Linux, routers, and so much more. Defeat hackers and spies with best-in-class encryption and leakproofing. Access any content, no matter your location. Say goodbye to geo-blocks. Connect to any of our unlimited-bandwidth, ultra-fast VPN servers.

Get the #1 Trusted VPN

Yarn is required to install dependencies to build Daedalus.

Nix is needed to run Daedalus in .

Daedalus, by default, uses the following metadata server for all networks except for the mainnet: .

It's also possible to use a mock server locally by running the following command in prior to starting Daedalus:

Then proceed to launch Daedalus and make sure to provide the mock token metadata server port:

This enables you to modify the metadata directly by modifying the registry file directly:

Use the following command to check if the mock server is working correctly:

If you use any 3rd party libraries which can't or won't be built with webpack, you must list them in your and/or ：

externals: [// put your node 3rd party libraries which can't be built with webpack here (mysql, mongodb, and so on..)]

For a common example, to install Bootstrap, and link them in the head of app.html

Make sure to list bootstrap in externals in or the app won't include them in the package:

Notes: Be aware that only a single Daedalus instance can run per state directory. So you have to exit any development instances before running tests!

To package apps for all platforms:

To package apps with options:

Use to pack your app with options for macOS, Linux and Windows platform. After build, you will find them in folder. Otherwise, you will only find one for your OS.

Platform-specific build scripts facilitate building Daedalus the way it is built by the IOHK CI:

The result can be found at .

The result will can be found at .

This will use nix to build a Linux installer. Using the IOHK binary cache will speed things up.

The result can be found at .

Sours: https://github.com/input-output-hk/daedalus
How To Install \u0026 Setup Daedalus Wallet For Cardano DeFi Ecosystem

A fake website allegedly belonging to the Daedalus crypto wallet is being marketed on the digital distribution platform Discord with the intention to scam users of their ADA holdings.

The fake website identified by a Reddit user is luring users to perform updates on their Daedalus Wallets. In the Discord post, made under the fake Cardano Official Release account, the promoters note that it is mandatory for users to update their wallets without fail.

The perpetrators are promising users that the new updated wallet comes with a host of features including the ability to convert crypto into fiat, more speed, and stability while terming the wallet as more robust.

Expect more market volatility this month, Invesco strategist projectsAustralians lose over $100 million to investment scams in 2021; Q3 hits a record highCardano is on the brink of rebounding to new highs, TA analysis show

Notably, like other cryptocurrency-related products, the Daedalus wallet has previously fallen victim to crypto scams.

“WARNING: We have been alerted to a SCAM site posing as the official Daedalus wallet site. Our domain ends in .io and ://NOT.net! Please ensure you download ONLY from our official site – linked here for your safety and security,” IOHK warned.

The scammers’ target of ADA comes in the wake of the crypto rising to new levels. By press time, ADA was trading at $2, having gained over 45% in the last seven days.

The token has managed to break through key resistance, with assets targeting the $5 price mark. The Cardano network has recently received increased adoption with various use cases alongside continued network updates.

This year, with the growth of cryptocurrencies, wallet scams are on the rise, and fraudsters attempting to leverage the profits in the sector.

Will they not search. " - I said with a smile. "No, today they went to friends for the weekend" - she answered getting up and heading to the bedroom. I gave her my longest T-shirt instead of. A nightie and started undressing myself.