How-To Set Up A Mikuni Round Slide Carburetor

All things considered, the round-slide Mikuni is an excellent carb, with a wide range of tuning capabilities. You can also find jets and parts easily. A huge number of vintage bikes come equipped with the good old round-slide Mikuni carb. In fact, just about every Japanese bike from the 60s and 70s came with this mixer.

Still, many dirttbikes equipped with the Mikuni round slide run poorly or are hard to start. A basic understanding of this carb will make life a whole lot easier. And, if nothing else, making your vintage dirt bike (or late-model dirt bike) easier to start and less prone to fouling plugs, will be worth the time to learn a few things.

WARM VERSUS COLD
When an engine is warmed up, it usually restarts easily. Just open the throttle part way, boot it, and it starts. However, when it’s cold, the problem is that gasoline drawn into the engine tends to remain in liquid form and not evaporate. To create a combustible mixture in the cylinder, some of the fuel has to evaporate and make a vapor. The vapor mixes with the air, and when the ratios are correct, it can be ignited with ignition spark

Some carbs, such as Bings or Amals, have a little plunger on the side, called a tickler. When you push down on it, it reaches into the float bowl and forces the float downward. This opens up the float valve and lets gasoline flow into the bowl until you release the tickler button. This causes the fuel level in the bowl to be too high for normal operation, but just fine for priming the engine.

When you kick over the engine, the airflow through the venturi passage can pick up the extra gasoline, because the fuel level is higher in the bowl. With the extra fuel, it can be sucked up, and out into, the air stream more easily. If your mixture is way too rich, or you prime it too much, you just might foul a spark plug, especially with a two-stroke. You can spot a fouled plug by the plug tip wet with fuel, and it doesn’t spark.

You’ll have to pull out the wet plug and replace it with a dry one, properly gapped. Kick it once or twice without priming any more, and it should start. If you don’t have a spare plug handy, open the throttle fully and kick it a few times without priming it any more. This lets in a lot of air and not much gasoline, and with any luck, it’ll dry out in there and you can finally get it started.

The Mikuni simplifies the priming process by using a standard primer control lever, a.k.a. a choke.

DON’T OPEN THAT THROTTLE WHEN USING THE CHOKE!
When the choke on a Mikuni round slide is closed, the starting circuit is shut off. Sometimes, when the temperature is very cold, you may have to use the choke lever for a few minutes while the bike warms up. However, if you leave it on too long, you might end up with that fouled plug we talked about earlier.

CHOKE MECHANISM
This is different than a choke primer, in that a choke mechanism is a mechanical slide that lives up in the top of the carb, and can be moved down into the main air passage in front of the carb slide. Also, many chokes have a little trap door held closed by a spring. When you’re cranking the engine with the choke closed, the door springs open just the right amount to allow the necessary amount of air to come in.

There aren’t any special fuel or air passages with a choke of this type. When the choke plate is lowered into the air path, fuel will come up out of the needle jet and enrich the mixture for starting. The position of the throttle slide doesn’t make much difference, because this system doesn’t rely on a closed throttle slide to create high vacuum behind it. 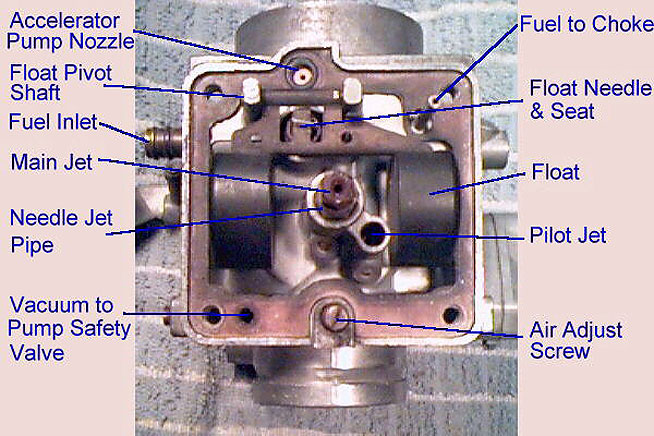 AFTER THE BIKE IS STARTED
Once you get the thing lit off, the bike now has to idle. The idle system on all conventional carburetors is exactly like the starting carb, except it doesn’t have a lever to turn it on and off. It works anytime the throttle slide is closed (or nearly closed) and there is sufficient vacuum behind the slide to pull idle mixture out through a small hole, which is also just behind the slide–on the bottom of the air passage, usually.

DIALING IN THE PILOT JET
The pilot or idle jet should be the right size to allow you to perform the idle adjustment. If you can’t get it to idle properly, you might have the wrong size jet. Here’s how to tell: Let’s say you’re turning the idle air screw in and it should be making the mixture too rich. The engine speed keeps increasing until finally you have the screw turned all the way in, and it’s running best right there. By the time you get the screw turned all the way in, the mixture should have been much too rich. So you can figure that the idle jet is too small, and needs the next size larger.

If you back out the idle air screw and the engine just keeps running faster and faster until finally the screw falls out of the carb, it tells you the idle jet is too big and is letting too much fuel through. Install a smaller (leaner) one.

THE IDLE SYSTEM IS CRITICAL TO OVERALL PERFORMANCE
The idle system is part of the carb’s entire operating system. By opening the throttle slide, the main system is supposed to take over and the idle system is supposed to decrease delivery of mixture. The transition between these two systems is critical to good performance when you first crack the throttle, and on up to about one-eighth open.

THROTTLE SLIDES
The part that affects throttle response coming off idle, is the throttle slide cutaway. Most slides have a V-shaped section removed from the bottom of the throttle slide, with the open end of the V facing toward the mouth of the carb. The amount of cutaway is indicated by a number stamped on the slide. A higher number means more cutaway.

More cutaway makes the mixture lean. Less cutaway makes it richer. If your engine hesitates when you open the throttle part way, and seems to hesitate briefly before giving you a surge of power, the off-idle mixture may be too lean. Try a throttle slide with less cutaway.

If your Mikuni stumbles when you crack the throttle wide-open, it isn’t throttle slide cutaway. Why? Because when the slide is quickly pulled up, cutaway doesn’t have a chance to affect the transition.

MAIN JET SELECTION
The Main jet is a small jet in the bottom of the float bowl, located in the center. It’s actually the easiest of all the Jets to choose. All you have to do is run full throttle for a minute or so and then take the plug out and get a reading. If the plug is black and oily looking, the main jet is too rich and you should put a smaller number in. If the spark plug is white or gray looking, you’re too lean and you must go to a larger number main jet. As long as you get that spark plug out and find a tan color on the tip, you’re probably okay.

That’s about all you need to know on the Mikuni round slide, a carburetor that we’ve all seen at one time or another. Once you get it dialed in, your bike should start easy and run clean throughout the entire range. Is it any wonder then, that all sorts of bikes that came with other carbs get switched to a round slide Mikuni?

Molkt 26mm, 28mm, 30mm round bore carby's
Used on a few different pit bike's, i find them ideal for using as paperweight's lol
The reason i say this is a lot of the Molkt's i've played with either work fine or they can be very touchy, float's touch the bowl's, needle and seat's stick etc etc
It may have just been a dodgy batch of them but it's put me off

Yes I am your slut, perdol me deeper. slut likes how her mom bangs. and she accelerated making jerks stronger and sharper, no worse than how I tore her in the bathroom.

Then Ksyuka suggested "accidentally" to show how it happens. Leave the door ajar to the bedroom. On the third day we talked again, nevertheless spied on. He made contact, even started talking, asking what and how. We bought a book, showed it, told it.

Tears welled up in my eyes. Let me go. You are welcome". But there was no answer.

I straighten up and remove the rubber band from my worthy member. I turn to Christine: Now you. She was already so excited that she did not have to repeat it twice.