Attention anglers: Effective July 23, 2021, the daily bag limit for lake trout will increase to 5 (in aggregate with other trout and salmon) for Lake Michigan, Green Bay and their tributaries, excluding the Mid Lake Reef Complex.  Lake trout fishing will be open year-round on most waters. Check the trout fishing regulations for more details.

Lake Michigan, or the big pond as many Wisconsinites know it, is the No. 1 most frequently visited water in Wisconsin and it's easy to see why. Whether by boat or onshore, a fishing pole will bring you some of the state's best and most diverse fishing, not to mention picturesque views.

And with millions of fish stocked annually to keep populations healthy - there's a good chance there will be a bite on your line.

Plan your trip, get information about charter fishing and learn more about how the department is working to protect and enhance the Lake Michigan fishery through the links below.

Find places to fish on your own! This information will help you get started.

Lake Michigan's fish of the future 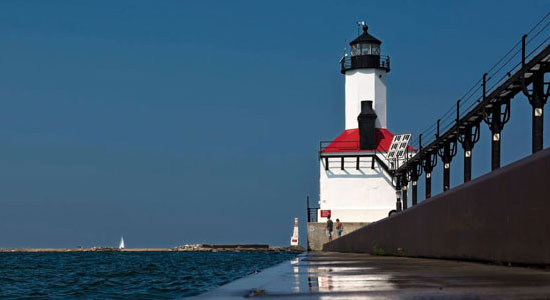 Fishing in Lake Michigan and tributaries

Use the interactive 'Where to Fish' map

Fishing by season, Lake Michigan and its tributaries

Click on the links below to find out more detailed information on when to fish for certain species in Lake Michigan.

During January, February and March, fishing activity is limited to the streams and warmwater discharges along the shoreline. All the discharges originate from shoreline property owned by private industry.

Three warmwater discharges are available to shore anglers for access. The areas may be closed when the lake is too treacherous or the National Threat Advisory has been elevated. They are:

Shore fishing for trout and salmon

Angling methods for bass include bait casting and the use of common live baits (crawlers; minnows). Smallmouth are particularly vulnerable to fishing after dark.

Where to Fish on Lake Michigan

The DNR public access site and Creek Ridge Park are both handicap accessible.

REMEMBER: The majority of Lake Michigan tributaries run through private property; permission from landowners is required to fish on these private lands.

Limited access to warmwater discharges is provided by industrial plants located on the shoreline. Due to recent economic downturns and increased security, many areas have either been closed or public access is not being granted. You can see a list of locations under winter fishing

In general, fishing reports will be updated once per week, usually on Tuesdays. This may change based on the availability of reports and the work schedules of field staff.

Fishing report information comes from our creel survey clerks, who work in the lakeshore areas from March through October, and in the tributary rivers seasonally in spring and fall. Creel clerk schedules are random and vary in the days and times they are scheduled to be in a specific location, which allows us to generate statistically valid fishing efforts and harvest information.

Information for these reports is only based on days and times of the week that creel clerks are present. Additional fishing information can be found by contacting local bait shops, charter captains, marinas, etc.

REMINDER - Anglers must carry a paper copy of their license/stamps while fishing on the waters of Lake Michigan, Lake Superior and the Wisconsin/Michigan, Wisconsin/Minnesota and Wisconsin/Iowa boundary waters.

Any questions or comments - Email Us:

This was not the first time I was at the dacha of my old friend Vasya S. This time I came not only without reason, but even practically without an invitation. That is, I knew, of course, that many of his acquaintances would be glad to see me there, who for some time. Now became my good acquaintances. There were many funny and kind girls with whom I, of course, wanted to see again.

Her face was red, tears welled up in her eyes from the strain, her lips were slightly swollen. But nevertheless she. Smiled happily. Thank you, master.

The kettle began to let in steam when the shower door opened and. Lenka came out. If someone told me when that one day I would see her at home, I would just laugh in her face And now. She was in.