Features Face the world's most dangerous animals, where a well-placed shot draws the line between life and death in this thrilling, non-stop hunting adventure!

25 of the World's Most Dangerous Animals
React quickly or get mauled by ferocious animals including Lions, Grizzly Bears, Cape Buffalo, Rhinos, Elephants, Jaguars, and more!

9 Exotic Locations around the Globe
Travel the globe to places such as the Alaskan wilderness, the African savannah, the Russian tundra, and the South African jungle.

Intense Melee Combat
Failing to stop a ferocious animal charge will leave you in an intense struggle for your survival!

Challenging Boss Encounters
Each level ends with a boss encounter, which will require skill and strategy to bring down the trophy.

3 Different Hunting Modes
Story Mode – Play as Flint Abrahams, an experienced big game hunter, on his quest to hunt the world's most dangerous game.
Bonus Hunt Mode – Use the skills you've gained in a series of hunting challenges.
All New Action Zone Mode – Fight waves of attacking animals in this arcade style gameplay mode where you can compete against your friends for high scores.

Tromping out into the woods with a high-powered rifle or two, an equally high-powered hand-cannon, some bait, bear collars, tranquilizer darts and scent cover, and then waiting for a majestic deer to trot out into a beautiful green meadow so you can shoot it in the head isn't much of a sport -- it's more like a massacre. However, introduce a glut of blood-thirsty predators to the mix, each hunting the hunter singlemindedly as he scrambles to bag his trophy kill and escape in one piece, and you're getting a lot closer to a level playing field.
That's the premise in Cabela's Dangerous Hunts 2009. You play Flint Abrahams, hunter extraordinaire, as he adventures around the world tracking and tagging some of the wild's most dangerous animals. However, Flint's mystique as one of the best hunters on Earth waffles throughout the story, as it seems something goes drastically wrong everyplace he shows up, and it usually doesn't take long for things to turn ugly.

Cabela's Dangerous Hunts 2009 plays more like an adventure game than a traditional hunting title. You'll spend most of your time traversing wilderness maps in search of prey that, once you've entered the appropriate area of the map, is extremely easy to spot. It's even easier to spot your prey if you make use of the "Hunter's Sense" mode (you can enter into it at any time by clicking down on the left analog stick and has no time limit attached or maximum uses) which allows you to view the world in black and white, and highlights any creatures or interest points in your field of vision. By and large, there's no need to carefully bait your prey and lure it out for a killing shot -- you'll simply wander around the game's environments blasting whatever crosses your path.
Also, each of the stages in "Career" mode is timed, which forces your hand to adopt a run-n-gun approach and takes the decision of whether or not to make an attempt to hunt patiently and wait out that perfect shot out of your hands.

The game's prologue is set in Russia, where you're tasked with taking down a red deer, which conveniently walks right out in front of you at the start of the level -- no need to take a single step in any direction or to use your scope to zoom in for that perfect shot. Immediately after you shoot your first deer, a cutscene starts up in which a bear appears out of nowhere and charges your hunting partner, injuring him badly and triggering the game's "Hand-to-Claw Combat" mode. Yeah, you guessed it, you get to go mano-a-mano against a brown bear. However, there isn't actually much to do once you're squared off against said big nasty, just a couple of simple controller prompts to follow (on the 360 you'll press buttons, on the PS3 you'll tilt your SixAxis controller in the directions indicated) and the bear scampers off.

Although the adventures you'll undertake in Career mode definitely get more involved (and convoluted) as you advance through the game, the basic mechanics remain the same and, as you rack up kill after kill, you'll probably find that putting a bullet into each lion, tiger, hyena, bear or buffalo's brainpan feels less rewarding each time you squeeze the trigger. Kill shots don't trigger any special animations either. Each time you plug an animal it will simply keel over and die, then vanish from the terrain. Simply put, plugging your prey gets old really fast.

Hand-to-Claw Combat adds a cool wrinkle to the game, but the folks at Activision didn't take it far enough. There is no way for a player to trigger Hand-to-Claw Combat. The game's AI makes that decision for you. And there doesn't seem to be any particular rhyme or reason to when the game will trigger the combat mode either, with the one exception being certain points in the adventure when it's scripted that a beast will attack at a certain point and engage you at melee range.

At points, packs of hyenas will swarm you and attack and the Hand-to-Claw Combat will trigger automatically, allowing you to beat the hyenas down with the butt of your rifle and your hunting knife. But at other points in the game you'll be faced with an identical situation and Hand-to-Claw Combat won't be engaged, so you'll be forced to shoot down the charging scavengers.

Cabela's Dangerous Hunts 2009 does offer you another cool power to use in those situations when you're outnumbered by quick, agile foes hell-bent on making a meal of you. The "Adrenaline Boost" ability (which can be used by clicking down on the right analog stick) brings the action around you to a screeching halt, Matrix-style. This allows you to pinpoint vital spots on your would-be killers and gun them down before any of them has a chance to take another step. Although the ability to freeze time and blast every nearby enemy in the blink of an eye adds an exciting element to first-person shooters, it feels anti-climactic when you're the only one packing heat.


The environments in CDH 2009 look passable. However, Flint's interactions with those environments definitely fall short. For starters, the environments' boundaries are sometimes impossible to distinguish by sight, and you'll encounter tons of instances where you simply run into invisible walls in the middle of clearings and, worse yet, instances where the lone, impenetrable barrier blocking your path is the same kind of low brush that you typically have no problem walking through. You'll also find that there isn't any body of water that's more than ankle deep -- you have no problems walking across the Congo River as though you possess a touch of the divine.

Another major drawback from this title is that every animal you encounter takes on the behavior of a dangerous predator. While it's expected that beasts like lions, tigers and bears (oh my) would attack you on sight, it feels out of place and unnatural for scavengers like hyenas to seek you out and attack you if you've left them undisturbed, and it's laughable when herds of elephants stop their grazing to chase you down and attack you once you're within a few hundred yards of them.

There are also several levels in Career mode that require you to hunt animals without killing them, forcing you to holster your high-caliber rifle and pistol in favor or a tranquilizer gun, which isn't the worst thing in and of itself. But, that leads to another major flaw in the gameplay -- once you've plugged a tiger with a tranq, it takes time for that tranq to kick in, and you're left with a charging tiger to deal with (humanely) in the meantime. Your only option in these situations is to make a run for it... except that Activision hasn't provided Flint with the ability to run! So, you'll have to make do with walking away at as brisk a pace as you can manage. The Adrenaline Boost feature can be manipulated to allow you to get a decent head start on your attacker, but the fact that you can't run still hurts the game's feel of realism and authenticity.

Yet another problem with the game's Career mode is that mission objectives are sometimes extremely unclear, and require you to figure out what you're supposed to be doing on the fly. In one instance, you're asked to tag three brown bears so that the locals can track their movement and gauge their impact on the local ecosystem, but you're never directed to put the collars on the bears. So you'll find that even after you've tranq'd the first bear, your objectives screen will still indicate that there are three bears left for you to tag. It wasn't until I went into the "Gear" menu and saw the bear collars that had been added to my cache unannounced that I realized that I had to walk up to each slumbering bear and apply a collar to complete the objective.

CDH 2009 does offer a nice variety of guns as you progress through Career mode and allows you to use "Upgrade Points" to trick out each weapon with new barrels, bolts, triggers, stocks, scopes and ammo. But, your choice of weaponry doesn't seem to impact gameplay enough to make a significant difference in Flint's success on each adventure.

Cabela’s Dangerous Hunts 2009 incorporates aspects of the hunting, adventure and first-person shooter genre, but doesn’t do any of it particularly well. It doesn’t require any strategy to hunt down your prey, and once you have located your target you shouldn’t have any trouble taking it down with a well-placed shot or two, and those facts conspire to make the hunting experience entirely un-gratifying. The adventure aspects of the game don’t require any strategy or problem solving either, acting instead as stilted interludes used to fill the space between point-and- shoot hunts. While this game has some fun novelty appeal, it has very little lasting appeal and is definitely a better rental than purchase.

Was this article informative?

GameSpot may get a commission from retail offers. 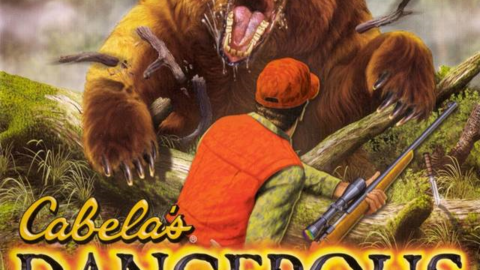 Cabela's Dangerous Hunts franchise returns and features 25 of the world's most dangerous animals and 9 exotic locations.

The letter that came to me in the post office. Turned out to be pure "scam", but the idea was presented. I decided to advertise on a dating site that an older man offers oral services to older women.

Tights, especially thin ones, should be pulled slowly, and they are only half dressed. I had to speed up the process - immediately pull on tights, put things in a bag and run through a pine park about 200 meters. When I reached a remote place, I realized that they did not run around in pantyhose in a pine forest, and quick.

Lenka shuddered, almost let go of her peignoir, but clenched her hands in time. She cried out. Igor swung, the second blow was much stronger. Lenka screamed - "Two!" The third blow really burned her, she jumped, her legs clenched by themselves.

Teardrop camper near me