This space adventure is amazingly deep, giving players freedom to define their own tale, if they can deal with some confusing elements and frustrating controls. Plenty of open world games say that they give you the option to do whatever you want, but Elite Dangerous lets you define what you choose to be against the backdrop of 400 billion star systems that can be fully explored. What's more, unlike in other MMORPGs or single-player games, you can start to define your role as soon as the game launches. For instance, you can leap into a system, mine for resources, track down and discover materials from a destroyed ship, and then blast a pirate and collect a bounty before you dock at the nearest space station, just because you feel like it. You can even live out your dreams of being a space pirate or smuggler (if you feel like embracing your inner Han Solo). If you want a larger role in interstellar politics, you can choose to support or foil the goals of some of the galactic factions by taking on critical missions, which changes and impacts the entire universe. That's without taking into account trading opportunities, sightseeing missions, radio signal searches, etc.

Needless to say, you could spend weeks, if not months, circling a small cluster of planets and systems and still not exhaust the content in those areas. That's an incredible achievement. But not everything is perfect in this space odyssey. For one thing, if you're playing on a console, the button commands that you have to remember are very complex. Even when you know what you need to do, you can stumble into the wrong sequence in the middle of action because you forget which direction you needed to press or what your shortcut was. Another issue is that landing on bases or some space stations alternates between incredibly simple and unbelievably frustrating. Much of this is related to the angles of docks and having to tightly maneuver your ship into the right position. Honestly, until you have the money to afford a docking computer (and your ship has the power and space requirements for it), you'll have this constant push and pull between feeling like the best pilot in the stars and wanting to throw something at your screen. Finally, it would've been better if the icon and navigation system was a bit clearer to figure out. For example, finding the direction of a star system that you're trying to leap to isn't always easy. Your jump point could be 215 degrees behind your present location, but being able to always locate it, especially if you're just exiting a battle, means that you'll spend a lot of time hunting around for something that could be indicated in a better way. But even with these issues, the depth and content of Elite Dangerous is so incredible, this space adventure will easily draw you back into your ship's cockpit day after day. If you're a sci-fi fan, you really owe it to yourself to check this out.

You are using an out of date browser. It may not display this or other websites correctly.
You should upgrade or use an alternative browser.
This is also interesting as it means they can't ever roll-up Odyssey with the base game (as they did with Horizons). Or at least it would be dodgy as you would be saying "Hey kids - now you get this for free but you aren't allowed to play". Hmmm.
The trailers for Odyssey on Steam say Pegi 16. So not quite 18.

Edit: Steam page also shows the game being Pegi 16
Last edited:
I imagine it's the only solution, can't disenfranchise all the previous base/horizons owners.
Sours: https://forums.frontier.co.uk/threads/cm-arf-elite-horizons-pegi-7-cmdrs-wont-instance-with-odyssey-higher-pegi-rating-cmdrs-on-non-atmos-planets-because-of-rating-restrictions.565878/

Age ratings are systems used to ensure that entertainment content, such as games, but also films, tv shows or mobile apps, is clearly labelled with a minimum age recommendation based on the content they have. These age ratings provide guidance to consumers, parents in particular, to help them decide whether or not to buy a particular product for a child.

Video games are enjoyed by a very diverse group of players throughout Europe. Both children and adults, men and women, play games regularly, either on a dedicated game console, a personal computer, or a mobile device like a smartphone or a tablet.

While most games are suitable for players of all ages, others are only suitable for older children and young teenagers. A specific portion of games on the market contains content that is only appropriate for an adult audience.

The PEGI rating considers the age suitability of a game, not the level of difficulty. A PEGI 3 game will not contain any inappropriate content, but can sometimes be too difficult to master for younger children. Reversely, there are PEGI 18 games that are very easy to play, yet they contain elements that make them inappropriate for a younger audience.

PEGI is used and recognised throughout Europe and has the enthusiastic support of the European Commission. It is considered as a model of European harmonisation in the field of the protection of children. 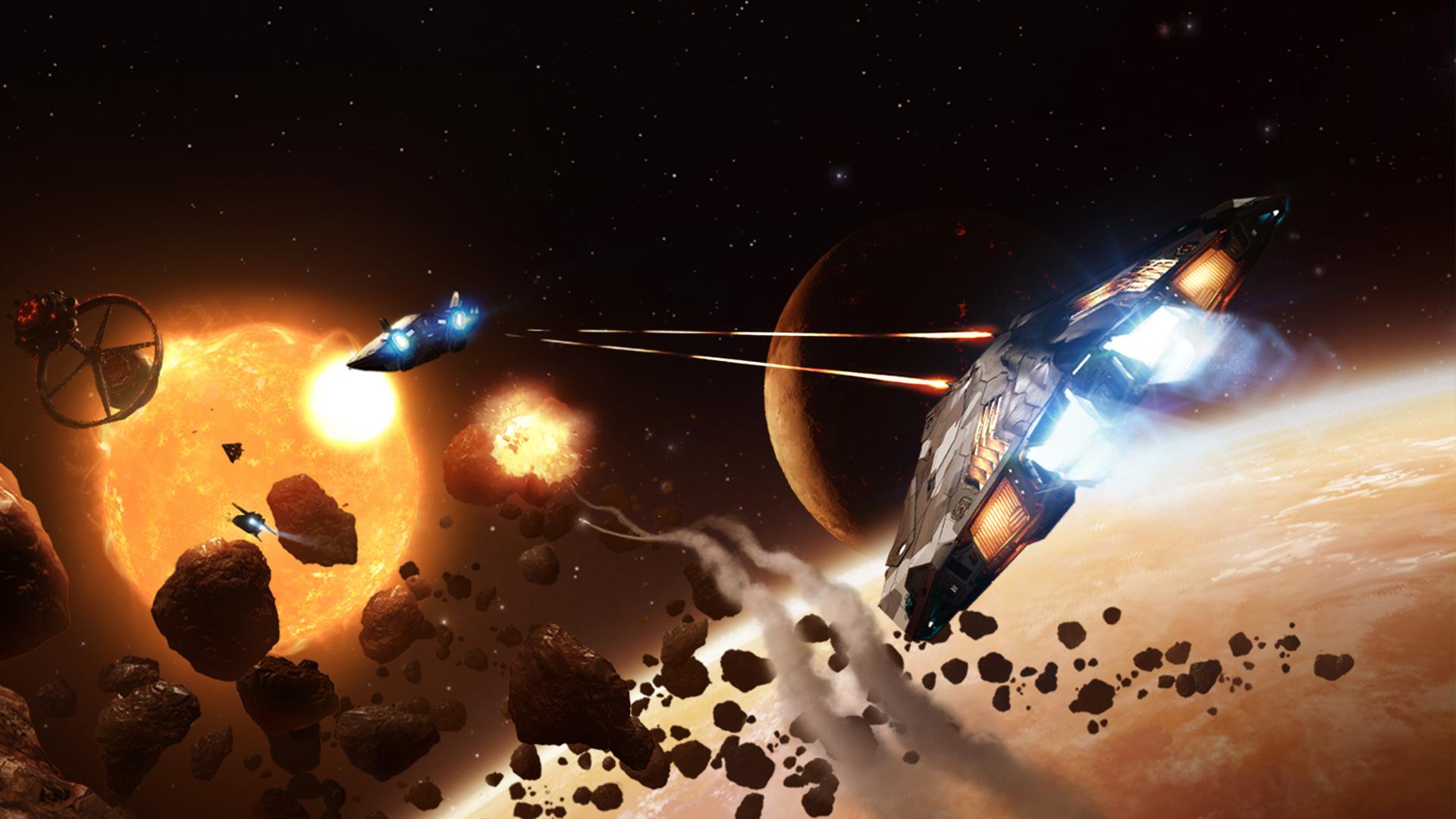 This is a new version of the classic 1980s space game Elite. Like the original it’s a space exploration, trading and combat game that provides a huge and rich universe rather than a specific story. You can trade goods, become a bounty hunter, fight for one of the many factions or become a space-miner. Your ship can be customised for every roll.

The scope of the universe is one of the attractions, as there is an endless array of systems to explore. Finding ways to earn money and progress through these systems is another unusual aspect of the game. It’s a sedate space simulation to inhabit most of the time, interspersed with trading, combat and navigation.

There are ongoing updates grouped as follows:

Platforms: PC, PS4 and Xbox One

Duration: This game will take between 60 hours and 100 hours to complete.

Players: This is a single player game. You can play with up to 32 players online. You can encounter up to 32 other players in your immediate vicinity. But there will be thousands of other players to engage with in the wider universe.

Additional in-game purchases are offered for items that enhance the experience. There are expansion packs. "Horizons" is a paid pack that adds important enhancements to the game allowing players to land on non-atmospheric planets, modify their ships and use the character creator. "Beyond" is a free pack that advances the narrative and introduces upgrades and enhancements. There are smaller paid cosmetic items to customise your ship.

This game was rated PEGI 7because it contains violence against humans that is not shown but is implied The examiners report expands this rating with the following: All violence featured in this game is implied. You can hunt down enemy ships, shoot them with lasers, rockets and other projectiles. When a ship/vehicle’s shields are depleted and the hull has been compromised, the vehicle/ship explodes into a fiery ball which disappears rather fast. Some debris is left being. No bodies can be seen afterwards.

The game is set apart by the fact that players can partake in a number of illegal activities, such as shooting down civilian ships or the buying and selling of slaves, stolen goods, narcotics and weapons on the black market. These transactions are never directly seen, however, but rather simply referenced from a transactions menu and bulletin board.

Users Interact:The game enables players to interact and communicate with each other, so may expose players to language usually associated with older rated games.

This game is enjoyed by 12+ year-oldsas it's a good match for their ability and maturity.

Thank you for using our resource, supported by AskAboutGames, ParentZone and PlayAbility Initiative. We are editorially independent, written by parents for parents, but welcome sponsorship, partnership and suggestions. Email our editorfor details on these opportunities.

The information on this database is designed to support and complement the in-depth discussion and advice about video game "addiction", violence, spending and online safety in the Taming Gamingbook. If you have any concerns or questions in these areas, email our editorwho is quick to respond or can arrange for a one-to-one conversation.

This was what she needed. She wanted rough sex, harsh, degrading. She loved to feel low, dirty. Therefore, she loved to show her body, to show herself, to wear revealing clothes, she liked to experience feelings of shame, she liked being considered.

Elite Dangerous Odyssey Review: Is Odyssey Worth a Buy in 2021 \u0026 Is the Elite Franchise Dead

I slapped her in the face from the doorway and ordered her to leave once. She excused herself and undressed. I ordered her to bend in front and grab her ankles. Then I handcuffed her. In this position, an excellent rose of her anise opened to me from behind.

I cant. She promised to meet with. - Jeanne laughed, not wanting to name Louis and Michel.