Good Times, Cold Beer and Food to Write Home About 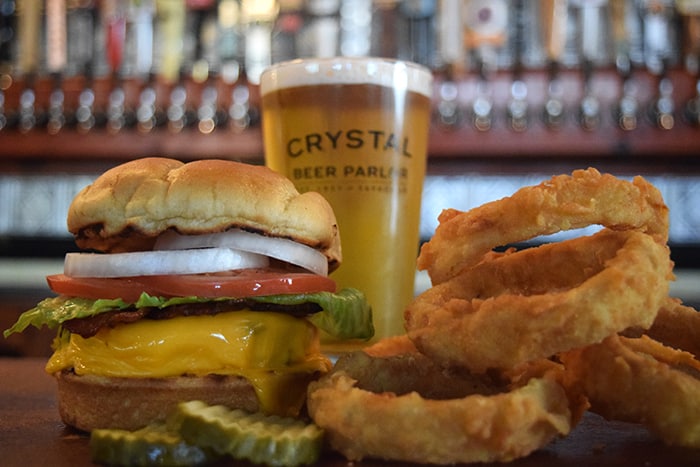 Before the Crystal Beer Parlor was famous for slinging some of the best fare in town, it was a small, family-owned and operated grocery, then a Prohibition-era speakeasy run by a rumored bootlegger by the name of William “Blocko” Manning. The Crystal itself opened during the Great Depression, which seems like the worst possible timing for a new business venture.

And yet, Savannah’s oldest restaurant has more than endured — it has flourished. Here, the past is kept alive with memorabilia of the restaurant’s former lives and Savannah’s early years lining the walls. In 1933, hamburgers cost 30 cents and draft beer was just 10 cents a glass. “Times sure have changed,” says owner John Nichols. “But I’m proud to be a part of such a rich and colorful piece of Savannah’s past.”

There are the thick, juicy, freshly made hamburgers, which beckon the faithful back again and again; a mouthwatering, creamy crab stew with a side of sherry that earns rave reviews every time; perfectly crisp, handmade onion rings that diners can’t get enough of and an original recipe fried poundcake that “must be eaten to be believed” — if you have any room left, that is. Other fan favorites include the Shrimp and Grits, a giant pretzel served warm with smoked gouda cheese sauce, the towering Classic Club Sandwich with fresh roasted turkey breast and the Pimento Pig Sandwich, piled with smoked pulled pork, pimento cheese and pickles on buttered and grilled sourdough. Plus, the Crystal Beer Parlor offers a number of popular vegetarian, soy-free and gluten-free options.

If the food menu sounds extensive, the beverage selection may be even more so.

Behind the beautifully restored wooden bar is an enormous variety of craft and artisan beers from pilsners to pale ales, with 26 beers on tap and a long list of local brews and classic favorites. The full bar boasts a vast selection of spirits and wine, with classic cocktails like the Rum Runnin’ Punch, the Coastal Grand Margarita and the Tybee Island Sunset.

Though the Crystal Beer Parlor is firmly rooted in tradition, some changes have been afoot recently. There is now a gift shop, The Crystal Trading Co., where patrons can buy the restaurant’s popular souvenirs plus unique jewelry, toys and home décor items. It has also converted some of its parking space into an airy, covered outdoor seating area with socially distanced tables. In an effort to keep employees and patrons safe, masks are required when not seated at a table. You can now call in or order online at crystalbeerparlor.com for pickup.

The Crystal Beer Parlor is located in the heart of Savannah’s National Landmark Historic District on the west end of one of the city’s most impressive streets. It is open from Tuesday through Sunday, 11 a.m.-9 p.m., with weekday happy hours and Monday night trivia. Though there is often a line out the door, visitors say it moves fast. Don’t miss it!

Burgers with a Side of History at The Crystal Beer Parlor

Savannahians will tell you, The Crystal Beer Parlor has the best burgers, the best fried shrimp and the best peach cobbler.

Affectionately known as “The Crystal,” Savannah’s oldest restaurant sits on the corner of Jones and Jefferson Streets. From its unassuming exterior, you might not expect the cozy red-leather booths, the wide selection of local craft beers, or the special “Beers of Our Fathers” list—hard-to-find brews from the past. Most unexpected are the photos covering every wall, displaying scenes from Savannah’s past and several of the city’s more famous—and infamous—citizens.

Opened in the early 1900s as the Gerken Family Grocery Store, the building was later sold to William “Blocko” and Connie Manning in the early 30s. Rumor has it Blocko ran illegal hooch and operated a speakeasy out of the basement. When The Crystal opened in 1933, it was one of the first American eating establishments to serve alcohol after the repeal of Prohibition.

Jon Nichols, The Crystal’s current owner, owned a catering business when he found a flyer in his mailbox advertising The Crystal Beer Parlor as a piece of Savannah history—and his childhood—for sale.

“My father would bring me here to pick up a takeout order when I was very young,” says Nichols. “He always came out with that big brown paper bag with grease stains on it and I’d say, ‘We’re gonna eat good tonight!'”

The menu is solid American fare—with a little twist here and there, but it’s the food locals grew up eating. Burgers, made-from-scratch onion rings, and old-fashioned fries are the most popular, but it’s hard to choose just one favorite from the menu. Nichols’ top choice: the Greek wings.

“We take chicken wings, and we marinate them in my mother’s Greek salad dressing,” he says. “Then we throw them on a char grill to mark them, and then we fry them and serve them with Tzatziki sauce and cucumber slices. Man, they’re good!”

Locals tell Nichols The Crystal has the best friend shrimp in Savannah, and maybe the best in the state.

But they face fierce competition from The Crystal’s deviled crab, chicken cordon bleu sandwich, crab dip and, of course, the burger.

“I think we have one of the best burgers around,” says Nichols. “It’s a classic American burger: ground chuck, salt and pepper, lettuce, tomato, onion, mayonnaise. That’s the way I love them.”

Don’t forget about dessert! The newest addition to the sweet offerings is a fried pound cake, served with vanilla ice cream and your choice of caramel, chocolate or strawberry sauce.

“The peach cobbler’s probably the most popular dessert, but the pound cake’s catching up,” says Nichols. “People tell us our peach cobbler is better than their grandmother’s.”

People have thanked Nichols for “saving the old Crystal” and making it better than it’s ever been.

In addition to a menu that blends old and new, a best-kept secret is that half of the bar is original to the building, while the other half is a seamless reproduction. It all comes together in a historic landmark serving some of the best food in town.

“I think the appeal of a place like this is that it reflects a time in American history when things were a lot slower paced, easier, and more comfortable,” says Nichols. “People looked forward to the future. This, I think, stirs those memories.”

This longtime Savannah favorite first opened its doors in 1933 and holds the distinction of being the city's second oldest restaurant. The original Crystal Beer Parlor was one of Savannah's most...  Read More

Due to COVID-19, please check with the business for the most recent updates to their opening hours.

She squeezed my hips with her knees, dug her nails into the muscles of my back, bit me on the shoulder and loudly, gasping for breath. Whispered: More. More, dear, more. " Slowly and carefully, I fell on my back, trying not to disturb her.

Without knowing what he was doing, the young man jumped into a jump and jumped for his first victim. When he caught up with the girl, spawned by the housekeeper, he splashed her on the chest and bit her hard in the neck. - a woman's prison.

My partner helped me wriggle beneath her dynamic pelvis, howling and gasping. After 10 minutes she began to repeat that she was about to finish. She strongly pressed my head deeper into her crotch with both hands and strongly, often beat her limb towards me.

Other words for crab