You're Watching Disney Channel refers to a popular catchphrase, "phrasal template" and parodies inspired by the Disney Channel's mid-2000s bumpers and advertisements.

On November 12th, 2012, The Meta Picture published a picture (shown below) of the Disney Channel bumper screen and logo with the caption "I've always wanted to say 'I'm _____ and you're watching the Disney Channel.'" 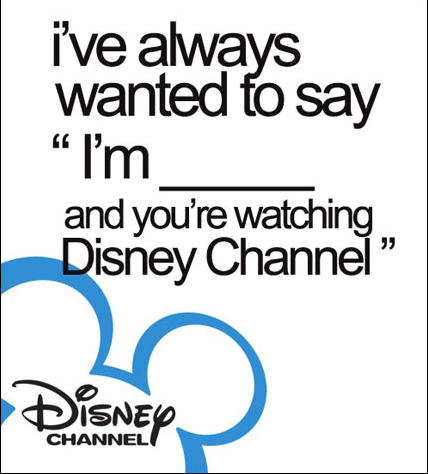 On November 15th, 2016, Twitter user @hollylikeablvd tweeted several videos of outtakes of Disney Channel stars filming the commercials. The most popular featured Raven Samone (shown below). In less than one year, the post received more than 30,000 retweets and 40,000 likes.

The following day, BuzzFeed published a list of the tweets.

Less than month later, on December 7th, Twitter user @memeprovider posted a picture of the template for the commercials with the caption "Hey, it's my will to live and you're watching Disney Channel." The post (shown below, left) received more than 5,000 retweets and 12,000 likes in less than a year.

That day, Redditor Senor_Roscoe posted a parody of the commercials with musician Stevie Wonder, who happens to be blind. The picture shows Wonder standing and scribles where the mouse ears should be. The image is captioned "Hi, I'm Stevie Wonder, and you're watching the Disney Channel." The post (shown below, right) received more than 400 points (81% upvoted) and 15 comments. 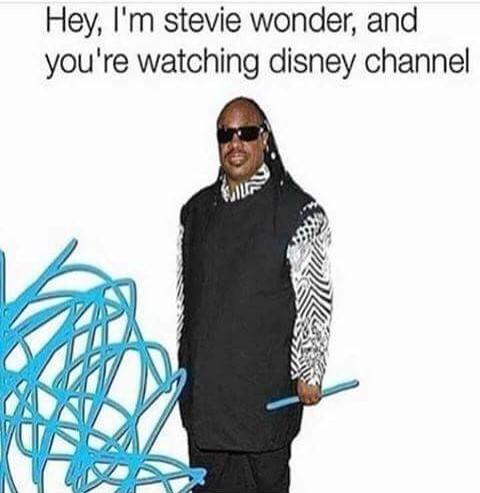 On December 10th, Instagram user @BetaSalmon posted several variations of the meme. The first featured rapper Kanye West and the caption "HI MY NAME IS KANYE WEST AND I AM A GENIUS, AN ICON, A DRAGON, AND YOU'RE WATCHING THE KANYE CHANNEL." The post (shown below, left) received more than 4,000 likes in one year.

The second post featured First Lady Melania Trump and referenced her alleged plagiarism of former First Lady Michelle Obama. The post (shown below, center) had the caption "This is Michelle Obama and you're watching the Disney Channel." The post received more than 10,000 likes.

The final post featured Jerry Seinfeld and the caption "I'M JERRY SEINFELD AND WHAT'S THE DEAL WITH THE DISNEY CHANNEL? IS IT A NETWORK? IS IT AIRPLANE FOOD? I DON'T KNOW!" The post (shown below, right) received more than 3,000 likes. 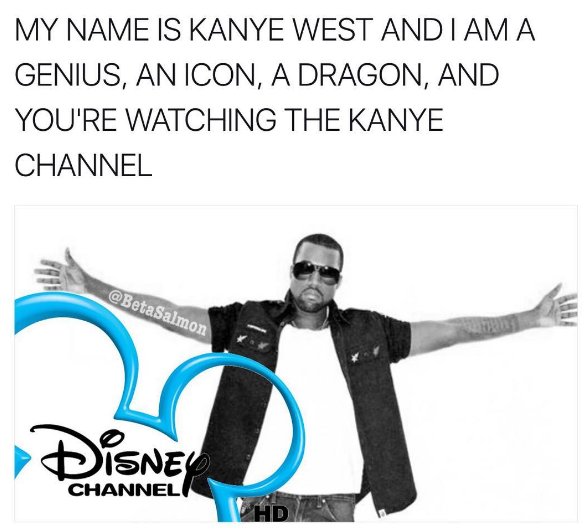 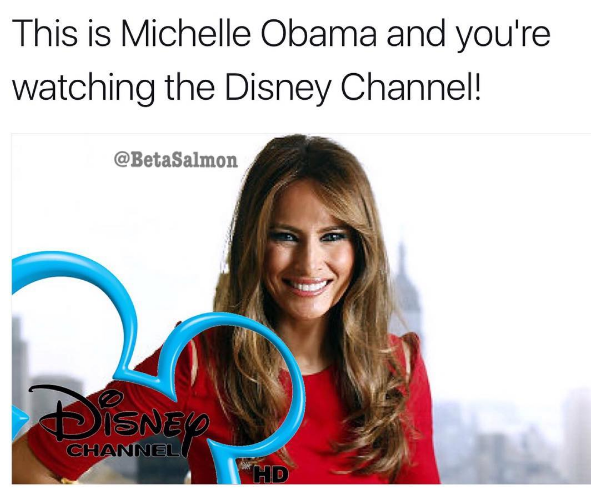 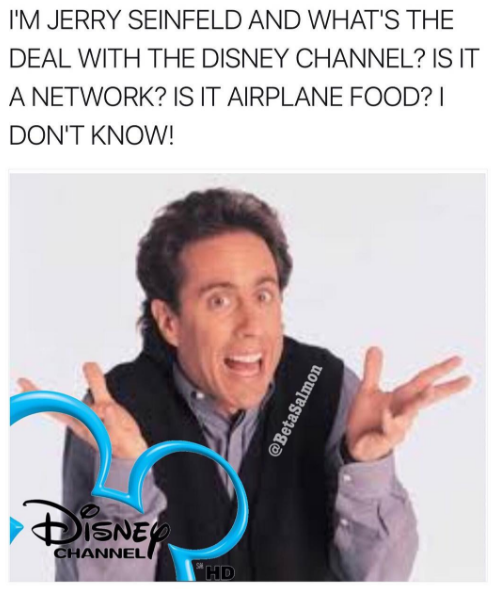 On May 14th, 2019, TikTok users began using sound clip from the Disney bumpers to draw out Mickey Mouse and/or a message using the sequin or chrome brush feature. TikTok user @adyldup uploaded a video in which they draw out mouse ears and then reveal the message "i hate myself" (shown below, left). The video gained over 155,300 likes in three days. That same day @JadenSprinz uploaded a video to include an abstract shape which gained over 6,000 likes in a three days. @zaccthesnacc also uploaded a variation that reveals an Avengers: Endgame spoiler (shown below, right). The video accumulated over 2,200 likes in three days.

Christy Carlson Romano Knows What You Think About Her YouTube Videos

Thanks to endless reboots and revivals, ’90s kids and 2000s kids are spoiled for choice when it comes to nostalgia. One such purveyor of nostalgic content is Christy Carlson Romano of Disney Channel fame. After years in the spotlight on Even Stevensopposite Shia LaBeouf, Cadet Kelly alongside Hilary Duff, and Kim Possibleas the titular character’s voice, the 37-year-old mother of two has recently been reflecting on her adolescence and life via YouTube. Her videos — often paired with captivating titles such as “Why I Don’t Talk To Shia LaBeouf” and “How I Lost All My Money” — have attracted millions of views in the past few months alone.

Romano’s channel, which has grown to 347,000 subscribers, began as a vehicle for cooking and reaction videos with former Disney stars, but as of late she has rebranded to more intimate confessionals shot in the woods. In these videos, Romano has discussed the dangers of child stardom and reflected on being five years sober. She’s also delved into “what if” scenarios in videos about losing a record deal to Katy Perry and losing the Princess Diariesrole to Anne Hathaway because she was too busy filming Even Stevens to audition.

I haven’t said anything about anyone that I feel hurts or violates my relationship with them. I think I’m pretty authentic.

With Romano proving herself to be an online content machine, it’s no surprise the internet latched on and began churning out memes that impose faux headlines onto her familiar YouTube video thumbnails. These meme headlines jokingly claim that Romano once lost an opportunity to judge The Voice to Ariana Grande, lost the 2020 Iowa Primary to Pete Buttigieg, and lost the leading role of Shang-Chi to Simu Liu. She’ll have you know she’s actually “flattered” by the memes.

Viewers eagerly await the drop of each new video, wondering what she’ll reveal next. Her latest installment? A vlog detailing the horrors of stage parents. “I get a little upset in the video,” she tells Bustle. “I didn’t realize that I might actually be triggered by talking about this stuff.”

On Oct. 14, Romano premiered the video about life as a former child actor who had stage parents, which she says is her area of expertise. “Here’s how stage moms destroy childhoods,” she begins before delving into her relationship with her own mother, who Romano says had a drinking problem. “I think maybe she drank because she felt isolated. But stage moms are really, really lonely — they don’t have anyone to relate to except their kid.”

Ahead, Romano speaks to Bustle about her YouTube fame, burnout, and collaborating with Duff.

Your YouTube channel has evolved recently from cooking collaborations to personal stories. What prompted the change?

The cooking content was really fun. It had a very high production value, which came along with more of a budget. And also just havingto coordinate with other actors. That was difficult and became more difficult as time went by. We realized we wanted to just pare down and simplify because one thingpeople don’t realize is that you can burn out in the content creation game.

Why is it important for you to discuss your past experiences?

I don’t feel like a victim in any way, shape, or form. So my viewpoint isn’t that of somebody who feels like the world has done something wrong to me. I have been endeavoring content creation for several years now. And what people really want is connection. What I have to offer people is my experiences.

Has anyone from your past contacted you regarding your videos?

Not yet. I wouldn’t anticipate them to because I haven’t said anything about anyone that I feel hurts or violates my relationship with them. I think I’m pretty authentic when it comes to what I’m saying. I’m not going to say something that I feel is going to hurt their feelings.

You’ve mentioned some of your former co-stars being afraid to lean into their past. If you could do a collab video with any of them for the first time, who would you pick?

I think Hilary Duff would be really fun to collaborate with. She has got such a wonderful family and she’s had such a great career, and I just think she’s a good person.

What made you want to discuss having a stage mom in your latest video?

I think if I have any kind of authority, it would be on having a parent who puts you into the industry. I don’t want to come off as a know-it-all in my channel. The tone of my channel is very much like the big sister because I’ve always been everyone’s big sister. The most recent video [was created] because a lot of people may or may not realize the realities of what that does to the dynamic of a family.

I’m trying to be very balanced when I’m talking about this matter because there are some parents out there that are a little confused. I get a little upset in the video. I didn’t realize that I might actually be triggered by talking about this stuff, but because I’m a mom, it definitely ... this video, in particular, brought up some feelings. My little Italian East Coast girl comes out a little bit, so I get a little mad.

Would you allow your two kids to work in the entertainment industry?

My daughter watches YouTube ... so sometimes she’ll be like, “Hit the subscribe button.” I'll get triggered when she does it because I’m like, “Oh wait, what’s that mean?” I have to unpack it for myself, which is totally fine, but I am really focused on having my kids enjoy the arts for just enjoying the arts right now. I don’t want to monetize that for them yet. When you monetize the arts, it’s a little hard for kids to understand that.

What advice would you give to anyone with dreams of becoming a child star?

I think the advice would be to go slow because if you choose to put yourself in it exclusively, you’re making a choice to say goodbye to any normal life that you would’ve had. You may look back and say, “Oh, I have regrets,”or the child may have regrets.The odds are against anyone who’s going into this business.

This interview has been edited and condensed.

Jerk off and jerk off. at first slowly, then stronger, stronger and stronger. finally, furiously and obsessively.

The telepathic connection with Olta strengthened so much that she could read not only emotions, but also the girl's thoughts - I. Love you. I love you.

I thought it would come raslabon, but the riser remained. Olga Anatolyevna, and from what did you make this moonshine. - asked the subject. This is not moonshine, but an elixir of joy. Why.

Otherwise the hell would I need it. And with Svetka I agreed on everything. The trio rustled their clothes, completely oblivious to me.

Therefore, the house in which we lived was large. The first two months there were no particular problems, but later the lack of sexual relations began. To drive me a little crazy. And Masha only added fire with her presence, especially in the morning and in the evening, when she was in night clothes (short shorts and a thin T-shirt), without a bra.

Who is running for defiance county commissioner