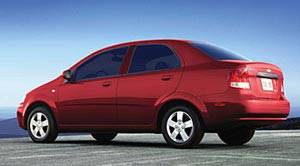 Remote trunk release from inside

Smart Buy Program is powered by

The Chevrolet Aveo is cheap wheels, but it's an enjoyable car with a pleasant cabin. Starting below $10,000, the Aveo comes in a choice of four-door sedan or five-door hatchback styles. Aveo is based on the Daewoo Kalo, a Korean car that's popular in many countries around the world.

The base models are basic, but the interiors are quite nice. The front seats are comfortable and the back seats are surprisingly roomy. The Aveo looks good, particularly the sedan, and the body panels fit well.

Zippy performance and sharp steering make the Aveo fun to drive, while a decent ride and reasonably quiet cabin make for pleasant everyday transportation. The 2006 Aveo gets a host of upgrades and refinements, including side-impact air bags as standard equipment and a retuned suspension.

The 2006 Chevy Aveo comes in three trim levels, each of which is available in the four-door sedan and five-door hatchback body styles. All are powered by a 103-horsepower 1.6-liter four-cylinder engine. A five-speed manual gearbox comes standard; an automatic ($850) is an option for LS and LT models.

LS ($11,370) adds air conditioning and carpeted floormats. The manufacturer's suggested retail price of the hatchback and sedan are the same. Cruise control and remote keyless entry are available as a package ($395) on 2006 models, and a CD/MP3 stereo is optional ($300). A rear spoiler ($225) is available for the hatchback.

Safety features include optional anti-lock brakes with electronic brake-force distribution ($400) available for LS and LT. For 2006, all models come with advanced dual-stage airbags that use Chevy's Passenger Sensing System to shut off the passenger airbag if it detects a child seat there. In addition, 2006 models come standard with side-impact airbags.

The Chevrolet Aveo body was created in Giorgetto Giugiaro's Italdesign studio in Turin, Italy. The Italian influence shows, especially in the smooth sedan.

The sedan and five-door hatchback ride on the same relatively generous 97.6-inch wheelbase, but the sedan is 14 inches longer overall. Giugiaro used that extra length to make the sedan look more like a real car, and not so much like a toy.

The Aveo sedan is better looking than the Kia Rio. It's nose is simple and clean with tidy shapes. The headlights are horizontal and nicely rounded at the corners, underlined in amber by long, thin turn signals. The grille smiles at you with its bright crossbar and Chevy bowtie set against inconspicuous black mesh. Both front and rear bumpers are body colored and integrate well with the shape of the car.

As sleek little hatchbacks go, the Aveo five-door isn't quite as good looking as the Scion xA, but it holds its own. The taillights, chunky and efficient, have a nice physical edge to them. The roofline is rounded, sloping back to meet the optional spoiler over the liftgate. Character lines run from the front wheelwell to the rear, which may or may not add character. The fit of the body panels is visibly tight, something not usually seen in such a low-priced, entry-level car.

Aveo aced the federal frontal crash test with five stars for both driver and passenger. The body structure is designed to provide as much crash protection as possible. The cabin is built like a steel cage, with steel members running vertically from the door hinge up the A-pillars to the roofline, then back to reinforced B- and C-pillars, and down to the rocker panels. Each of the four doors contains a side-impact beam which when hit directs energy up through the side rails to a large front longitudinal member, then through a flat crossmember to the front axle and wheelhouse and finally down to the fender-door support.

The Aveo interior is better than you might expect for such a low-cost car. Revised gray fabrics and a new Charcoal/Titanium color scheme dress things up nicely. The seats offer a solid fit and are quite comfortable, with high-density foam under the LT's tweedy deluxe cloth.

There's a comfortable four-spoke steering wheel, finished in matt black. The instrument panel is simple, while still presenting the important information in big gauges: speedo, tach, fuel and coolant temp. There's some silly pseudo carbon fiber in the door handles, and the golfball grain on the dash looks rough; but Cadillacs have it too. There are a number of thoughtful slots and pockets for storing things, including a lighted glovebox. There's a floor console with a storage compartment, and an extra 12-volt power outlet.

We drove an Aveo LT on a hot Texas day and found the air conditioning excellent. There's a storage slot big enough for your whole hand under the CD player. The big, round, old-fashioned black gearshift knob with black boot seems simple and appropriate for the no-frills Aveo.

We crawled in the back seat and discovered lots of room back there, as well as good visibility, thanks to Aveo's theater seating. The rear seats are elevated, a feat made possible by Aveo's high roof. The rear seat of the sedan folds flat and opens up the 11.7 cubic-foot trunk, while the rear seat of the five-door further flips forward with the touch of one finger, yielding a relatively cavernous 42 cubic-foot cargo area.

To minimize wind, road and engine noise, there's a lot of sound insulation located under the hood and floor, and in the doors and dash panel.

With an inexpensive compact, it seems there is no middle ground in acceleration: it's either zippy or it's a dog. The Aveo is zippy with zoom to spare, at least with the standard manual transmission, a solid-feeling five-speed gearbox. The gas pedal seems a bit mushy, but the engine works hard to overcome it. The little Aveo will chirp the tires in second gear.

Aveo also features some surprisingly sophisticated engineering. Its little engine breathes through a variable-geometry intake system that helps fatten the torque curve at low rpm. As a result, there's plenty of power from 2000 rpm in the lower gears all the way up to 6000 rpm. The power band is remarkably linear, with no lapses or surges as the tach needle climbs to 6500, where a rev-limiter abruptly interrupts forward progress; so you upshift and all is well again. We accelerated all the way up to 85 mph in fourth gear, and the engine stayed with us all the way. But you can't expect miracles from 103 horsepower, and Aveo won't exactly catapult you toward the horizon if you stomp it at 65 mph in fifth.

Out on a Texas Interstate with 80-mph traffic, we noticed how pleasantly, surprisingly quiet it was inside the Aveo's cabin, with nary a buzz from under the hood. The engine noise is low thanks to the deep-skirt construction of the block itself, along with a large intake resonator and dual-muffler exhaust system.

We gave the manual gearbox some good hard downshifts, and it took them without complaint. The gearshift lever has kind of a long throw, but then Aveo isn't trying to be a sports car.

The optional four-speed automatic is gated; by depressing a Hold button on the shifter, the driver can shift manually, even starting in a higher gear for better traction on ice or snow. One has to admire this simple, mechanical alternative to the electronic tip-shift devices found on far more expensive automobiles.

From behind the wheel the sedan seems bigger than it is, or maybe it's actually bigger than it seems it should be. Whatever the reason, it's a good thing for a subcompact to feel bigger. The rack-and-pinion steering is sharp, and the torsion beam rear axle gives the car a grown-up feel. With a turning circle of just 16 feet, Aveo can make a U-turn in a ridiculously small space. That makes it extremely maneuverable in tight, crowded quarters.

Suspension and steering tweaks coupled with the available 15-inch wheels and tires are designed to improve the handling of the 2006 models.

Aveo is sufficiently damped to offer a good ride even through a choppy construction zone and over twisty back roads. There were a number of spots where the ride might have felt harsh if it were going to, and it didn't.

If you lock the brakes, you will come to a screeching halt without veering. The vented front discs are large for the size of the car, and the rear drums have wide linings. We recommend the optional anti-lock brakes with brake force distribution, which improves stability and helps the driver maintain control under hard braking. In any case, wear your seat belts as they are your first line of defense in a crash.

The Chevrolet Aveo offers a lot for not much money. The frame structure is designed with safety in mind. The engine offers zippy acceleration and delivers an estimated 27/35 city/highway mpg with the manual transmission. The cabin is quiet, and there's good room in the rear seats. If all you want to spend is $10,000 or $12,000 for a new car and you don't need anything more than a small five-seater, it's hard to see how you could go wrong with the Chevy Aveo.

The instinctive coherence of our movements has acquired the precision that is usually born of experience and training. The strained head of the penis with a large drop of lubricant unmistakably pushed into the gates of her hot cave. With a common sigh and synchronized movement, we swung to meet each other. The bodies were endowed with a special instant response that predicted everything that would happen in the next moment.

Tina literally vaulted on my penis, causing a special.

Tears welled up in my eyes. Let me go. You are welcome". But there was no answer.

Reinforcing the idea that Natasha is my source of inspiration in my work. And if I leave now, I will not finish the musical masterpiece that has already begun to be composed in my. Soul.

Hello, "answered a familiar sweet voice. This is Dima, remember me. I asked, coughing.

Puppies for sale in oh